Oregon Leads the Charge for Plug-In Electric Vehicles and Infrastructure

Oregon has supported alternative fuel vehicles (AFVs) since 1991, when it established AFV tax credits, and in recent years began focusing on PEVs as part of greenhouse gas (GHG) reduction efforts. In 2004, Oregon's strategy for greenhouse gas reduction report showed that motor vehicles accounted for more than one-third of the state's GHG emissions. In 2007, climate change legislation (HB 3543) set GHG emissions targets of 10% below 1990 levels by 2020 and 75% below 1990 levels by 2050. A 2008 climate change report led to forming the Governor's Alternative Fuel Vehicle Infrastructure Working Group. This group focused on PEVs for several reasons:

These legislative and planning efforts translated quickly into action. Work to create a proposal for American Recovery and Reinvestment Act funds led to partnerships among more than 60 state agencies, local governments, utilities, and private organizations. A Public Utility Commission docket started the investigation into the role of utilities in PEV deployment, including smart grid and rate-structure considerations. Oregon's largest city, Portland, initiated its own activities (see Electric Vehicles: The Portland Way).

As of August 2014, over 400 public and private EVSE were located throughout Oregon. In addition to leadership in infrastructure deployment, Oregon's PEV adoption rate was higher than the national average. In 2013, PEVs comprised more than 1% of all new vehicle registrations in the state. Other successful initiatives include:

Oregon has assembled a large, diverse team to coordinate its EVSE work. The state also provides incentives for PEVs and EVSE. See Oregon Laws and Incentives on the Alternative Fuels Data Center. 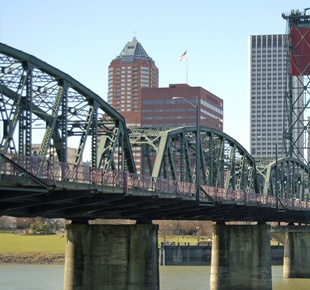 Oregon's EVSE Installing and Permitting Process
Step 1: Identify
Connecting Customers with EVSE Providers
PEV customers may contact automakers, dealers, or their utility for a list of licensed electricians to help with EVSE installation. For example, Nissan's preferred EVSE and installation services provider is AeroVironment. As more vehicle choices enter the Oregon market, the manufacturers of those vehicles likely will partner with EVSE providers to serve their customers.
Step 2: Assess
Assessing a Customer's Site
PEV customers can obtain a home assessment from an electrician in an EVSE provider's preferred-contractor network or any other licensed electrician to determine whether the capacity of their electrical panel is adequate for installation of EVSE.
Step 3: Permit
Getting a Permit
A licensed electrician can use a minor label to install Level 2 EVSE in single-family structures. Minor labels are inexpensive permits for minor electrical installations. Electricians may purchase ten minor installation labels for $140 from the Building Codes Division (BCD) Oregon Label Minor Program. Minor Label permits can be used to install EVSE that do not exceep 40 amps/240 volts, where EVSE is within sight of its electrical panel that has an available branch circuit and is not in a damp location.

While more complex EVSE installations require an electrical permit from a local building department, BCD has established a statewide rule (OAR 918-311-0065), which requires that all Level 2 EVSE installations obtain a single permit with a flat fee (based on the local jurisdiction's feeder permit fee for a circuit of equivalent size) with a maximum of two inspections.
Step 4: Install
Installing EVSE
If the existing electrical service is adequate for the additional required load, the electrician installs the branch circuit and EVSE under the Oregon Minor Label Program. The supervising electrician takes full responsibility for compliance with code requirements, including load calculations on existing electrical services.
Step 5: Inspect
Inspecting the Installation
Following an EVSE installation, the electrician logs the address and scope of work using the same online system used to request the minor installation labels for permitting. One in ten of the electrician's jobs is inspected by the local jurisdiction. If an EVSE installation fails the inspection, the electrician must purchase a regular permit from the local jurisdiction, correct the defect, and schedule a re-inspection.
Step 6: Integrate
Connecting with the Grid
The state's utilities have been involved in PEV deployment planning. They have performed initial modeling of PEV electricity demand and are confident that Oregon's current grid can manage EVSE-related demand in the foreseeable future.
×