In 1990, California passed the nation's first zero emission vehicle (ZEV) mandate, putting it at the forefront of PEV deployment with the rollout of General Motors' EV-1, Toyota's RAV4-EV, and Honda's EV-Plus. Although many vehicles from this generation were discontinued in the early 2000s, California's vision helped set the stage for today's PEVs, such as the Mitsubishi i-MiEV and the Ford Fusion Energy.

As California's largest city, Los Angeles is a huge vehicle market; it is home to 4 million people, with one of the nation's highest per-capita car ownership rates. A municipal utility, the Los Angeles Department of Water and Power (LADWP), serves the city's electric needs, and permitting in the utility's service area is done entirely by the Los Angeles Department of Building and Safety (LADBS)—both of these organizations facilitate PEV and EVSE deployment.

LADWP is leading Los Angeles' PEV efforts. As part of its Electric Vehicle Program, LADWP upgraded over 250 publicly accessible charging stations and provided rebates for 900 residential and commercial EVSE through June 2013. As part of a second rebate program through mid-2015, LADWP will fund an additional 2,000 EVSE for residential and commercial customers. LADWP is also promoting off-peak residential charging by offering discounted electric rates and is working with EVSE providers to evaluate the interaction of EVSE with utility meters to enable time-of-use (TOU) pricing. In addition, LADWP is expanding its own PEV fleet and helping employees do the same. As of August 2014, the utility had more than 60 light- and heavy-duty PEVs in its fleet and over 50 workplace chargers.

LADBS helped streamline the EVSE permitting and installation process. LADBS applied its existing online Express Permit system to EVSE installations (see steps at the right). The system enables customers installing standard EVSE to receive a permit automatically and instantaneously and start using their EVSE immediately after inspection, which occurs within 24 hours of notification that EVSE is installed. LADBS created a separate EVSE inspection division to help ensure this rapid turnaround. The entire city falls under LADBS' jurisdiction, which gives customers and their contractors a consistent process.

In addition to residential EVSE for many PEV drivers in Los Angeles, there were over 500 EVSE at nearly 140 publicly-accessible locations as of August 2014. The number of EVSE is expected to increase due to a 2013 amendment to the Los Angeles Municipal Code (Ordinance No. 182849) requiring that all new residential construction and a minimum of 5% of parking spaces at new multi-family dwellings and commercial properties be "PEV ready," meaning the location is equipped with the electrical infrastructure necessary to accommodate EVSE.

EVSE provider EV Connect and the Los Angeles County Metropolitan Transportation Authority (LA Metro) collaborated to integrate PEVs and EVSE with a public transit network, the first charging network operated and maintained by a transit authority in the country. As of August 2014, LA Metro provided 20 EVSE at five Park & Ride lots on each of the major commuter lines, with plans to double the available infrastructure. 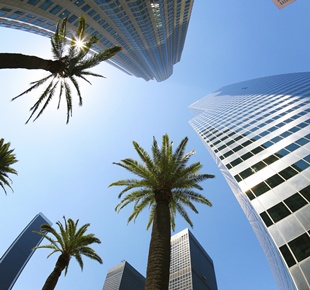 Los Angeles' EVSE Installing and Permitting Process
Step 1: Identify
Connecting Customers with EVSE Providers
PEV customers may contact automakers, dealers, or their utility for a list of licensed electricians to help with EVSE installation. For example, Nissan's preferred EVSE and installation services provider is AeroVironment. As more vehicle choices enter the Los Angeles market, the manufacturers of those vehicles likely will partner with EVSE providers to serve their customers.
Step 2: Assess
Assessing a Customer's Site
PEV customers can obtain a home assessment from an electrician in an EVSE provider's preferred-contractor network (such as AeroVironment) or any other licensed electrician to determine whether the capacity of their electrical panel is adequate for installation of EVSE.
Step 3: Permit
Getting a Permit
For standard installations, the EVSE customer's electrician applies for a permit online via the LADBS Express Permit system. Issuance of a permit is automatic and instantaneous for standard installations. The fee is generally $75. More complex installations, such as commercial EVSE over 600 amps, may have additional requirements.
Step 4: Install
Installing EVSE
Typically, the same party who conducted the site assessment also performs the installation. Los Angeles is working to incorporate a metering discussion into the installation phase so customers who want TOU pricing will not require an additional meter upgrade step later.
Step 5: Inspect
Inspecting the Installation
Following the EVSE installation, the electrician requests an inspection from LADBS. The inspection is completed within 24 hours of the request. Once inspected and approved, the customer can use the EVSE. If a separate meter installation is required, LADWP must install the meter prior to use.
Step 6: Integrate
Connecting with the Grid
As part of a project with the U.S. Department of Energy, LADWP is collecting and analyzing grid-impact data to enable proactive vehicle-to-grid interactivity discussions and research. A TOU meter can be installed following inspection of the EVSE installation. For more information, see the LADWP website.
×