Fast-growing Houston, the fourth-largest U.S. city, is an energy and transportation giant. It is home to the nation's largest petrochemical and refining complex and the second largest port. It has a "car culture", with on-road travel exceeding 140 million vehicle miles per day in 2011.

Spurred by concerns about air quality and greenhouse gas (GHG) emissions, Houston is becoming a giant in the deployment of advanced transportation solutions, including PEVs. The city has the nation's third largest municipal fleet of hybrid electric vehicles and the second largest municipal fleet of PEVs. The city also has taken measures such as consolidating its motor pool, which decreased its fleet size and reduced fuel use by 35,000 gallons per year, and initiating PEV use through its Houston Fleet Share program with Zipcar.

Central to Houston's PEV efforts has been the development of streamlined EVSE permitting and installation processes. The city applied its existing online express permitting process to EVSE installations (see steps at right). With this process, online permits from Houston's Code Enforcement Group are issued automatically and instantaneously for standard EVSE, and an inspection can be performed on the same day as installation. Thus, the entire assessment, permitting, installation, and inspection process for a simple EVSE project can be completed in one day.

The City of Houston began to electrify its fleet in 2009 and 2010 by converting 15 Prius vehicles to plug-in hybrid electric vehicles. In 2011, the city procured 25 Nissan Leafs, followed by two more in 2013, incorporating them into the City of Houston Fleet Share program, a carsharing program for city employees. Each of these vehicles is estimated to save the city $7,000 in fuel and maintenance costs over a three-year period. With the help of several EVSE manufacturers, the city also installed nearly 50 Level 2 and Level 1 charging stations in the central fleet garage to support the Fleet Share program.

As of August 2014, public and private access EVSE was present at nearly 100 locations throughout Houston. EVSE provider NRG eVgo selected Houston to host one of the nation's first networks of DC fast chargers. Nissan and eVgo then partnered to provide new Leaf drivers free access to this network for one year. Building on successes in Houston, Nissan will expand the program to 25 other markets. 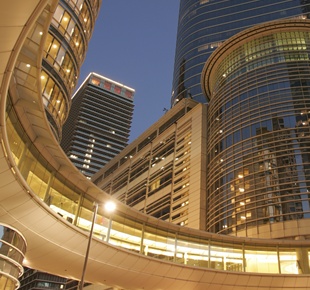 Houston's EVSE Installing and Permitting Process
Step 1: Identify
Connecting Customers with EVSE Providers
PEV customers may contact automakers, dealers, or their utility for a list of licensed electricians to help with EVSE installation. For example, Nissan's preferred EVSE and installation services provider is AeroVironment. As more vehicle choices enter the Houston market, the manufacturers of those vehicles likely will partner with EVSE providers to serve their customers.
Step 2: Assess
Assessing a Customer's Site
PEV customers can obtain a home assessment from an electrician in an EVSE provider's preferred-contractor network (such as AeroVironment) or any other licensed electrician to determine whether the capacity of their electrical panel is adequate for installation of EVSE.
Step 3: Permit
Getting a Permit
To facilitate Houston's electric vehicle adoption, the Public Works and Engineering department's permitting office created a 24-hour permitting process. The EVSE customer's electrician applies for a permit via the Houston Code Enforcement Group's Online Permits system. Approval is automatic and instantaneous for standard installations that provide load analysis and, on a case-by-case basis, a one-line diagram. The fee is currently $99.34. More complex installations have different permitting requirements.
Step 4: Install
Installing EVSE
Typically, the same electrician who conducted the site assessment installs the EVSE.
Step 5: Inspect
Inspecting the Installation
Following the EVSE installation, the electrician requests an inspection from the Code Enforcement Group. If an electrical contractor has purchased the required permit for the installation and requests an inspection, it will be completed by the next day for Level 1 and Level 2 EVSE. DC fast chargers may require more time and a plan review.
Step 6: Integrate
Connecting with the Grid
The city is working closely with utility CenterPoint Energy to research the effects of EVSE use on the grid. EVSE permit information is provided to Houston's electric power utilities to help them identify and address clusters of EVSE installations.
×