I believe the district is ahead of the curve and will continue to support alternative fuel vehicles and do our small part to protect the environment for our students.

Lee's Summit R-7 School District, which serves about 17,500 students in the southeastern Kansas City metropolitan area, takes its responsibilities to students and their environment seriously. In 2009, the district embarked on a path to become the first U.S. public school district to operate an all-electric distribution fleet in its primary delivery routes.

The district had been working to reduce costs and its environmental footprint for several years, and greening its fleet was the next step. In 2010, the district purchased four all-electric Smith Newton delivery trucks with help from an American Recovery and Reinvestment Act award managed by Kansas City Regional Clean Cities Coalition staff at the nonprofit Metropolitan Energy Center (MEC). The fleet of trucks, deployed in August 2010, is used to transport items such as school supplies and cafeteria food products from the district's warehouse to schools and other facilities. The all-purpose delivery trucks also provide in-district mail delivery among all R-7 facilities. Each truck travels about 500 miles per month. From July 2010 through May 2012, the four trucks logged a combined 42,700 miles, all without a single drop of diesel fuel.

The district approached MEC in May 2009 with its application to join in a proposal to the U.S. Department of Energy for Recovery Act funding through Clean Cities. In December 2009, MEC was awarded the funds for the Midwest Region Alternative Fuels Project, which is helping a number of public- and private-sector partners deploy alternative fuels and advanced vehicles.

In its original proposal to MEC, Lee's Summit R-7 planned to replace five school buses with diesel-electric hybrids. However, between the submission of the district's proposal and receipt of the award, Kansas City-based Smith Electric Vehicles educated local fleet operators about the capabilities of its all-electric Newton truck. Lee's Summit R-7 Director of Operations Ron Cox recommended the district change its proposal from replacing the five buses, which served a limited population, to replacing its entire diesel delivery fleet, which served every building in the district. The modified proposal had the added benefit of supporting a local business.

Each of the district's four electric delivery trucks has a dedicated charging/parking spot at the Lee's Summit R-7 warehouse. The district's maintenance building houses one additional charging unit. All units were installed in July 2010.

The district didn't have sufficient funds budgeted to purchase the electric trucks, which were about twice as expensive as conventional models. By partnering with the Kansas City Regional Clean Cities Coalition on the Recovery Act proposal, the district was able to obtain funding for half the cost of the vehicles and charging stations; it then acquired a low-interest bank loan.

Lee's Summit R-7 drivers and technicians were familiar with diesel vehicles but new to electric motors and batteries, so the district tapped the manufacturer for both driver and technician training. This personnel "retooling" was a challenge, "given the amount of technology on board versus the old days of combustion fired motors," Cox said. "Today our employees are 'operators,' not necessarily 'drivers.' They need to be familiar with the internal components to maximize the output and to reach top performance." Because the vehicles are manufactured locally in the Kansas City metropolitan area, and they have far fewer moving parts than conventional trucks do, maintenance expenses were drastically reduced. With close proximity to Smith Electric Vehicles, both partners benefit from rapid troubleshooting. This in turn helps all of Smith's customers.

Beyond savings in maintenance, the district expects a significant reduction in fuel expenses. In the 2009-10 school year, the R-7 district diesel fuel costs for the distribution fleet averaged $2.25 per gallon. In 2010-11, the district estimated the energy cost to operate the electric fleet at 11 to 15 cents per diesel gallon equivalent, equating to an average savings of $2.12 per gallon equivalent.

As a group, the electric trucks will achieve a projected lifetime petroleum fuel displacement of more than 80,000 gallons, estimated to yield at least $169,000 in fuel savings. In addition to the cost savings, the electric trucks will eliminate the distribution fleet's tailpipe emissions, positively contributing to air quality within school zones and surrounding neighborhoods. Finally, there's the benefit of noise reduction, which also pleases the truck operators.

To maximize the project's public education impact, the district has taken part in a joint media event and has received both local and national media coverage. Cox is pleased to speak out about alternative fuels. "I would recommend this project to any of my colleagues. The primary benefits for the district are the reductions in the purchase of expensive diesel, harmful pollution, noise pollution within the school zones, and overall maintenance costs," he said.

District representatives have further spread the word by taking part in several sustainability conferences. And at the 2010 Lee's Summit Sustainability Fair, R-7 drivers displayed an electric truck for the community and answered questions. The district's success with EVs has sparked interest by other school districts, which are inquiring about electric and other alternative fuel solutions. As a direct result, one such district in the Kansas City Regional Clean Cities Coalition's service area has plans to retrofit and replace its service vehicles with alternative fuel models.

"Not unlike computers just a decade ago, battery technology continues to improve," Cox said about EVs. "As this trend continues, the costs for that technology will continue to decrease. I believe the district is ahead of the curve and will continue to support alternative fuel vehicles and do our small part to protect the environment for our students." 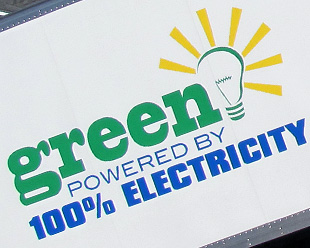