We've taken some important first steps toward lower emissions and reduced dependence on foreign oil. Everybody needs to be doing everything they can to set solutions in motion for the next generation.

Thousands of students in Virginia are breathing cleaner air, thanks to the hard work of several school districts and a small army of Virginia Clean Cities (VCC) stakeholders. Through the Clean School Bus USA Middle Peninsula Project, VCC helped four counties in the state's Middle Peninsula and Piedmont regions deploy biodiesel, idle reduction, propane, and other emissions-reduction strategies in their school bus fleets from March 2008 through December 2010.

"We've taken some important first steps toward lower emissions and reduced dependence on foreign oil," said Roger Kelly, transportation director for Gloucester County Public Schools. "Everybody needs to be doing everything they can to set solutions in motion for the next generation."

VCC laid the foundation for the project through early outreach to school districts, inspiring school boards to pass resolutions to reduce petroleum use in bus fleets. As a result, local champions were ready and willing to take action when funding opportunities became available from the U.S. Environmental Protection Agency's (EPA) Clean School Bus USA program, the Virginia Department of Environmental Quality (VDEQ), the Mid-Atlantic Regional Air Management Association, and other sources.

School districts in four counties used $39,000 to install diesel oxidation catalysts on 70 buses to reduce diesel emissions. VCC estimates the devices averted at least 39 tons of emissions during the 32-month project period, and they continue to contribute to improved air quality today. The project also paid up to $0.06 per gallon toward the use of B5 (5% biodiesel, 95% petroleum diesel) by two school districts.

Together, they used 347,080 gallons of B5 during the project, reducing emissions of both carbon dioxide and particulate matter by about 3%. Districts in two counties installed 24 engine block heaters and conducted driver training to reduce idling time by 23%, resulting in total estimated emissions reductions of more than 5 tons per school year. A pilot project in Gloucester County Public Schools put five Blue Bird propane school buses on the road. Funds from EPA and VDEQ subsidized the incremental cost of purchasing the buses, and now the district is benefitting from lower emissions, reduced petroleum use, lower fuel costs, quieter operation, and higher driver satisfaction.

From October 2009 to November 2010, the five buses saved almost $7,000 in fuel and maintenance costs and averted 8.4 tons of greenhouse gas emissions.

"The only complaint I've had was from one parent whose daughter is missing the bus because she can't hear it rumbling down the street like she used to," Kelly said.

Kelly's strong support for diesel alternatives was critical to the project's success. Also essential was a concerted outreach effort that provided administrators and school board members with the background they needed to make informed decisions. VCC pro-vided Kelly a scholarship to attend a propane vehicle workshop in Michigan and organized a propane bus demonstration for school board members, so they could see, touch, and ride propane buses. And now, Gloucester's success is helping to make the case for dozens of other fleets in Virginia who are considering a transition to propane. 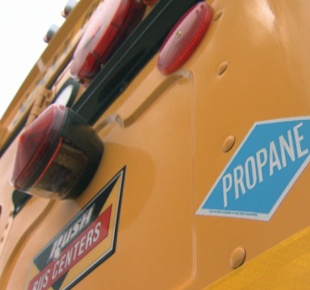