We were trying to find something better for the environment and do our part to clean things up.

Several Maine Clean Communities stakeholders are running on propane to help safeguard the state's natural wonders. In 2011, the coalition displaced more than 180,000 gallons of petroleum through the use of propane vehicles.

"We were trying to find something better for the environment and do our part to clean things up," said Mechanics Foreman Doug Havu of Maine School Administrative District No. 6 (MSAD 6), the state's third-largest school system. MSAD 6, located just outside Portland, operates 10 school buses that run on GM 8.1L propane engines. With funding assistance from the Maine Department of Environmental Protection, MSAD 6 acquired its first six propane buses in 2010 and added another four in 2011. During the same period, the department also provided grant funding to the Town of Scarborough to help with the purchase of four propane buses.

The MSAD 6 buses fill up at a propane station owned and operated by the district, located at its bus garage. MSAD 6's propane buses have a shorter range than their diesel counterparts, but a full tank is more than adequate for their regular routes, according to Havu. "They're very quiet, and the drivers who operate them think they're very nice to drive," he said. MSAD 6 is further limiting its vehicle emissions through a strict anti-idling policy. "We don't want buses idling, especially while children are out in the yard," Havu added.

About 160 miles up Maine's famously rugged coastline, visitors to Acadia National Park make their way among towns, campgrounds, beaches, and other park destinations via Island Explorer, a free public transit service. All of its 36 shuttles run on propane, and it has given a lift to more than 4 million passengers. The national park just joined Maine Clean Communities in the summer of 2012 with the goal of furthering its commitment to sustainable transportation.

Looking ahead, Main Clean Communities Coordinator Steve Linnell sees potential for more fleets in Maine to use propane in place of petroleum. "Maine's a very rural state, so we have some limitations in terms of infrastructure," Linnell said. "But propane is what some people use to heat their homes, and for other uses like barbecues and RVs, so it's ubiquitous." 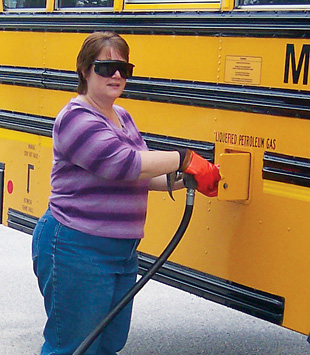