This is a text version of the video segment New York City Cleans up With Alternative Fuel Vehicles, which aired on Oct. 16, 2009.

JOHN DAVIS: Our success story of the week highlights the New York City Department of Sanitation. The nation's largest municipal refuse fleet is making great strides in using clean, alternative fuels. Among their dazzling array of vehicles is this hybrid hydraulic garbage truck, the only one in the country in its weight class. The agency is also testing hybrid electric and natural gas–powered refuse trucks.

NYC's 2,000 other diesel refuse trucks run on renewable B5 biodiesel as do 450 of their street sweepers. Another 25 are fueled by compressed natural gas, and the alt-fuel list continues with hundreds of light-duty gasoline-electric hybrids used by field supervisors along with six all-electric GEMs that move around the repair shop.

Collecting 22 million pounds of garbage daily, using vehicles that are less dependent on petroleum, is how NYC's Department of Sanitation is keeping it "clean and green" in the Big Apple. 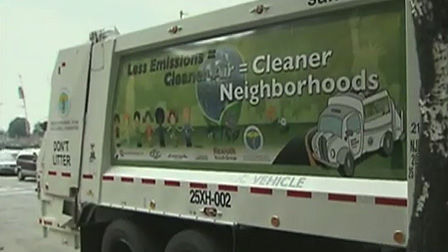