This is a text version of the video segment Wisconsin Reduces Emissions With Natural Gas Trucks, which aired on Oct. 2, 2010.

JOHN DAVIS: Our success story of the week comes from the City of Milwaukee, Wisconsin, the proud owner of two new compressed natural gas–powered sanitation trucks. The Cummings ISLG engine trucks are already making a big impact in the areas in which they operate. Not only are they much quieter trucks by design, they reduce emissions and greenhouse gases. Using CNG not only reduces the use of petroleum, it cuts the price of fuel by nearly $1 per equivalent gallon.

JEFF TEWS: We've noticed no difference whatsoever between the power of this engine and the power of a comparable diesel engine.

JOHN DAVIS: Besides collecting refuse, the trucks will also be used for plowing. The City of Milwaukee hopes to have more of these very clean CNG machines in service in the very near future. 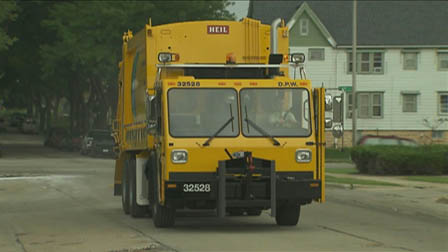