This is a text version of the video segment Corporate Fleets Set the Pace for a Green Driving Future, which aired on Nov. 21, 2013.

JOHN DAVIS: Thanks to the Department of Energy's National Clean Fleets Partnership, some of the biggest corporate fleets around the country are serving as pacesetters to a green driving future by adopting fuel-saving technologies and moving away from petroleum-based fuels.

Columbus, Ohio, is one of three cities being serviced by an electric truck fleet owned by snack food giant Frito Lay. As one of the Department of Energy's National Clean Fleet partners, Frito Lay has launched a fleet of Smith Newton electric trucks, the world's largest electric-powered truck, with two lithium-ion battery packs, a three-phase induction motor, and a 160-horsepower rating. Regenerative braking and this Opus digital readout that shows precisely how much charge is remaining, helps drivers achieve a 100-mile range. With zero tailpipe emissions and a virtually silent drive, it's no wonder that the crew behind the wheel doesn't want to get out when their shift is done.

GLENN REYNOLDS: What we've done is work with the driver to pair up with them, drive the route with them specifically so that we show them that it meets their needs and that it will not impact their business negatively.

JOHN DAVIS: As part of their commitment to the environment, Atlanta-based Coca-Cola has added more than 750 hybrid electric delivery trucks to their U.S. and Canadian fleets. The company's interest in hybrid vehicles started in 2001. Since then they've worked with truck-builder Eaton to develop platforms that meet their various direct-store delivery needs. This 35-foot trailer with regenerative braking works well for multiple stops. Coke says this large hybrid truck is the workhorse of their fleet, but it isn't the only vehicle in their alt-fuel lineup.

STEVE SALTZGIVER: A big benefit, of course, is our sustainability portfolio and the recognition we get in the market from that. And probably the most important thing is we're doing the right thing. You know, we're kind of enhancing our social license, so to speak, and promoting this technology that's out there.

JOHN DAVIS: The hybrid electric delivery trucks represent about 10% of Coca-Cola's overall North American fleet. Federal funds from the Department of Energy through the Clean Cities Atlanta coalition helped with the acquisition. Advanced hybrid technology represents open happiness for the popular soft drink company and its many fans worldwide.

TIANNA NOUROT: It's an engineered system that we have a lot of checks and balances in place to make sure that we're doing it in an environmentally friendly and sound way.

In Northern Indiana, the 15,000-acre Fair Oaks Farms, in partnership with AMP Americas, has built a public-access compressed natural gas station to service a new fleet of 42 CNG milk delivery trucks. A majority of the fuel will come from a biomethane pipeline, outlined by these yellow flag stakes and stretching 4.5 miles, to an underground anaerobic digester. The digester breaks down waste from the farm's 11,000 cows into methane gas. Currently Fair Oaks uses the biogas for power generation. This new waste-to-wheels fueling effort will help Fair Oaks reach its goal of reducing their milk long haul carbon footprint by 25%.

MARK STOERMANN: We decided that we would try to compress the gas, use it for fuel to actually deliver our milk to the processing plants in three different states: Indiana, Tennessee, and Kentucky.

JOHN DAVIS: By working with both of the Indiana Clean Cities coalitions and the state and federal government on this project, Fair Oaks estimates CNG will displace 1.8 million gallons of diesel per year, helping the Hoosier State milk a renewable green fuel for all it's worth. 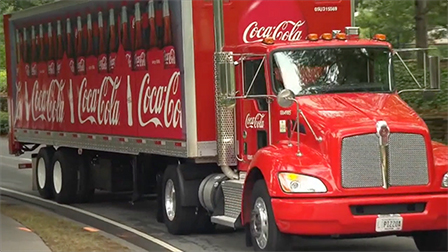