INL has done a tremendous job reducing its emissions and encouraging more efficient practices. It shares its successes and challenges to help others follow in its path.

INL's commuter buses drive approximately 2.75 million miles per year, transporting more than 3,000 employees to and from work at the 890-square-mile site. The fleet reduces the number of passenger vehicle miles, and their carbon emissions, and increases passenger safety during bad weather. The dual-fuel approach is being analyzed as a way to reduce both fuel costs and emissions. In fact, the dual-fuel technology reduces diesel use of each bus by 50%.

"INL is a longstanding stakeholder and partner of ours," said Phil Cameron of the Yellowstone-Teton Clean Energy Coalition. "It was after a coalition meeting that they connected with several regional LNG consultants that helped implement the dual-fuel process." Cameron said the coalition often incorporates lessons learned from INL's alternative fuels success into topics for regional workshops and seminars. The coalition partners with INL to support events and provide speakers. "INL has done a tremendous job reducing its emissions and encouraging more efficient practices," Cameron added. "It shares its successes and challenges to help others follow in its path."

A key step in implementing the dual-fuel technology was installing fueling station infrastructure. Blu, one of several project partners and an LNG application company, built an LNG fueling station where INL fuels its buses, south of Idaho Falls. "Once fueling infrastructure is in place, a long-term vision is for INL to convert its entire bus fleet to using strictly natural gas," said Tad Pearson, manager of INL's transportation and fleet management support services. Pearson serves on the coalition's board of directors.

"If the entire bus fleet was converted to be dual fuel, it would save the annual fuel equivalent of fewer passenger vehicles on the road," he continued. "The dual-fuel initiative is one way INL is pursuing cleaner, lower-cost, carbon-reduction alternatives for operating its bus fleets." 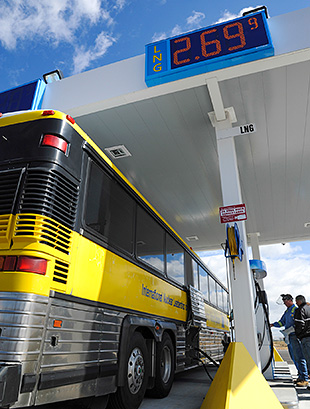