Class 8 tractor trailers are the biggest fuel consumers on the road, so running these vehicles on natural gas could result in significant savings.

When Indianapolis business owner and entrepreneur Kris Klyer attended his first Clean Cities workshop in 2005, he was expecting to pick up a few tips on reducing heating and cooling costs for a new building. Instead, the multiple-business owner learned how to slash the growing fuel costs for his 50-vehicle fleet--by converting his trucks to run on compressed natural gas (CNG)--and how to fund the construction of a CNG fueling station.

"Gasoline prices were rising, so I jumped at the chance to cut my fuel costs in half," Klyer said. "Plus, the State Energy Office and the Greater Indiana Clean Cities Coalition were offering fueling infrastructure grants, so the timing was right."

The only catch, Klyer said, was that in order to qualify for the funding, he would have to open the station to the public. Although hesitant at first, he admits now that making the station publicly accessible turned out to be a lucrative endeavor. In fact, he is looking for opportunities to build additional CNG stations in the five-state area.

"Business at the Lafayette Boulevard station is booming," he said. "In addition to fueling our own vehicles there, CNG fleet vehicles from AT&T and the Indiana Department of Transportation use it on a regular basis. We're looking into adding another fueling island to meet increasing demand."

Based on the station's success, privately owned CNG Fuel Inc. contracted with Klyer to oversee the construction of multiple new retail stations spread out along the Indiana-Ohio border.

According to Kellie Walsh, executive director of the Greater Indiana Clean Cities Coalition, the trucking industry is becoming more and more interested in transitioning to natural gas.

"Class 8 tractor trailers are the biggest fuel consumers on the road, so running these vehicles on natural gas could result in significant savings," she said. "And with the new Indiana income tax credit for commercial natural gas vehicles weighing more than 33,000 pounds, interest in the state is high." 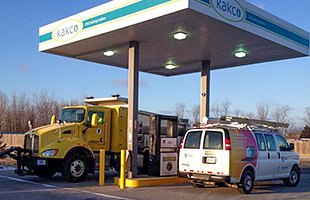