This is a text version of the video segment District of Columbia's Government Fleet Uses a Wide Variety of Alternative Fuels, which aired on Dec. 5, 2015.

JOHN DAVIS: Our success story this week takes us to Washington, D.C., where a varied mix of alternative fuels, from E85 to compressed natural gas, to biodiesel and even all-electric, are used throughout the District of Columbia government's fleet. Even parking enforcement runs on electric power. Nearly 60% of their fleet runs on cleaner burning fuels like B20 and they began using CNG back in the late 90s. With savings of close to 350,000 gallons of gasoline a year, the bigger incentive is a cleaner environment.

WILLIAM HOWLAND, JR.: The main benefit is that we have cleaner air and the entire region is benefiting by the fact that we're putting cleaner vehicles out on the street.

JOHN DAVIS: Recently selected as one of the top 10 greenest fleets in America, the District, an early member of the Clean Cities program, plans to expand the use of CNG to all of its 90 refuse trucks, a clear signal of D.C.'s dedication to alternative fuels. 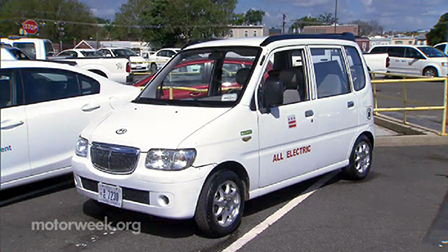