This is a text version of the video segment Natural Gas Street Sweepers Improve Air Quality in New York, which aired on March 11, 2010.

JOHN DAVIS: Our success story of the week focuses on the New York City Department of Sanitation's efforts to improve air quality for residents in the Big Apple. The country's largest municipal refuse fleet has 2,000 trucks that are being retrofitted with advanced-diesel-particulate filters. These filters remove up to 90% of the soot from diesel exhaust.

The agency also has a slew of street sweepers—some of which are fueled by compressed natural gas—that are PM-10 certified. That means they are equipped with a special technology to help minimize dust turn-up while sweeping.

This green cage is another particulate-filter assembly—similar to the one on their refuse trucks. Collecting 22 million pounds of garbage a day is no easy feat, but the citizens of New York can breathe easier knowing it's the cleanest pick-up around. 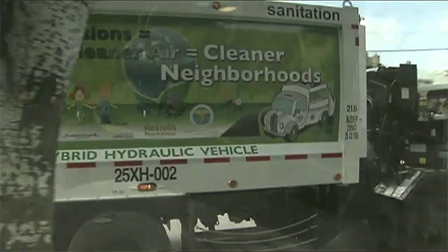