This is a text version of the video segment Lancaster Co., Pennsylvania, Converts Trash to Energy, which aired on July 23, 2016.

JOHN DAVIS: Our success story this week takes us to Lancaster, Pennsylvania, where trash is transformed into a valuable resource. The Lancaster County Solid Waste Management Authority has two waste-to-energy facilities that can power up to 45,000 homes and businesses. Plus, their transfer station uses 2,000 solar panels to help power the complex. In 2014, they added 14 new compressed natural gas transfer trucks and two CNG ash trucks that use time-fill posts to fuel up overnight. Fuel savings were more than $200,000 in the first year alone.

ROBERT ZORBAUGH: It's much less costly than diesel fuel and worked well. We're here in Pennsylvania where there's a lot of natural gas production occurring so it's a great fit for our operations.

JOHN DAVIS: Lancaster also has a Ford Focus Electric and Honda Civic NGV in their alt-fuel fleet. The transfer trucks also serve as rolling billboards, reminding Pennsylvanians that cleaner technologies are the keystone to cleaner communities. 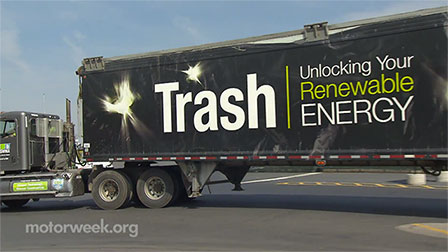