This is a text version of the video segment CNG Refuse Haulers Do Heavy Lifting in New York, which aired on Nov. 13, 2010.

JOHN DAVIS: Our success story this week takes us to Smithtown, New York. In 2006, Smithtown took a close look at compressed natural gas as a way to combat the rising cost of fuel.

This bi-fuel pickup truck allowed them to do some real-world testing. Shortly after, the city made it mandatory for all contracted trash haulers to use CNG. The switch helped lock in cheaper fuel prices and led to construction of a new CNG refueling station. Two neighboring towns followed Smithtown's example.

RUSSELL BARNETT: Combined, the three towns save over a million gallons of diesel fuel a year by using natural gas instead. 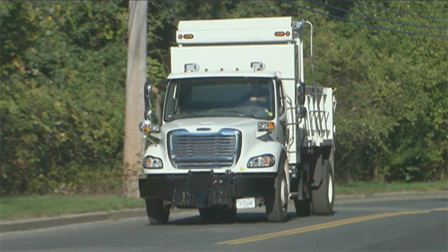