This is a text version of the video segment Liquefied Natural Gas Powers Trucks in Connecticut, which aired on June 4, 2011.

JOHN DAVIS: Our success story this week takes us to Bridgeport, Connecticut, and the first LNG-CNG fueling station east of the Mississippi. Owned by Enviro Express Natural Gas LLC, this six-month-old refueling depot stores nearly 15,000 gallons of liquefied natural gas. The station services the firm's new fleet of 18 LNG, class 8 tractors that are used to haul ash to a state landfill about 200 miles away.

The station also provides compressed natural gas to local company and municipal fleets. Funding came from a $6.2 million federal matching grant with a Connecticut Clean Cities Future Fuels project. The new tractors will displace over a half million gallons of diesel fuel annually. Drivers are pleased with the way they operate.

KARL STANGE: They like the trucks. There's no power loss. If anything, these have 75 more horsepower than our previous max that we used to operate.

JOHN DAVIS: Thirty-five miles north of Bridgeport at Meriden, Connecticut, is another new station—this one dedicated to CNG. The city public works department employs eight Honda Civic GXs for use by their inspectors—two refueling efforts that strengthen easy access to cleaner alternative fuels in the Constitution State. 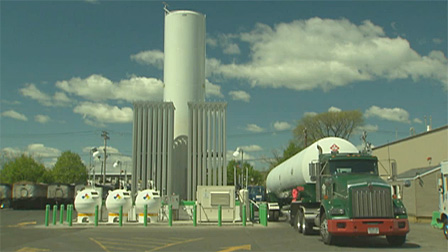