This is a text version of the video segment Rio Rico Fire District Turns Grease Into Biodiesel, which aired on March 3, 2013.

JOHN DAVIS: Our success story this week takes us to southern Arizona and an innovative alternative fuel effort by the firefighters of the Rio Rico Fire District.

The problem was what to do with leftover grease that migrates from a nearby river into the wastewater treatment plant. The solution was a biodiesel processing unit that turns the grease into fuel for their fleet of fire trucks, ambulances, and water tender trucks.

The pure biodiesel is blended to B20 and stored in a 500-gallon tank. With almost 90% of their fleet using biodiesel, the Rio Rico Fire District is saving thousands of dollars a year.

MARK GERBERT: I think we figured out somewhere it's costing right now between $8,000 and $10,000 a year, which is a substantial step for us.

JOHN DAVIS: As Rio Rico is only a few miles from Mexico, a similar biodiesel unit has been set up by firefighters there in a bi-national effort to turn waste into renewable green fuel for both sides of the border. 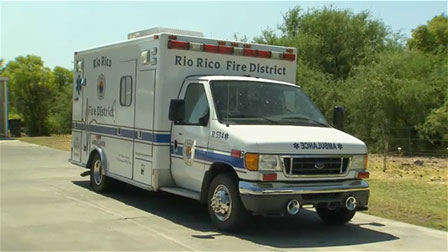