This is a text version of the video segment Metropolitan Utilities District Fuels Vehicles With Natural Gas, which aired on Oct. 1, 2011.

JOHN DAVIS: Our success story this week comes from Omaha, Nebraska, where Metropolitan Utilities District, a water and gas company serving more than 400,000 people, has been using cleaner-burning compressed natural gas in their vehicle fleet for 20 years.

Metropolitan began using CNG when gas prices spiked in the early 1990s. Today, thanks to a partnership with Clean Cities neighbors in Kansas City and the Department of Energy, their CNG fleet consists of 30 new converted Ford E-250 vans and 11 Honda Civic GXs. By this time next year, 50% of the company's fleet will run on readily available compressed natural gas.

DOUG CLARK: With all the gas that is being found in this country and the extraction processes that are being used, natural gas is a bargain.

JOHN DAVIS: Metropolitan has also built a new public-access CNG station near their fleet facility. The utilities company anticipates a fuel cost savings of nearly $100,000 in 2011, making this low-cost alternative fuel an eco-friendly option for Omahans. 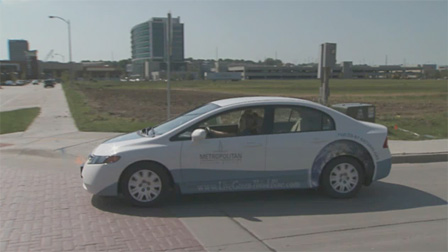