This is a text version of the video segment Happy Cab Fuels Taxi Fleet With CNG, which aired on June 15, 2013.

JOHN DAVIS—NARRATOR: Our success story this week takes us to Omaha, Nebraska, where the Happy Cab Company operates some 50 taxis powered by compressed natural gas. Working with the Metropolitan Utilities District, those taxis are fueled at Happy Cab's own public-access refueling station, which dispenses about 20,000 gasoline gallon equivalents of CNG each month.

The Kansas City Regional Clean Cities coalition helped with funding for the CNG station and conversions. Happy Cab isn't the only private fleet driving on the new alt-fuel corridor from Omaha to Lincoln, but they do expect to convert more of their 200-plus cab fleet to CNG.

JOHN DAVIS—HAPPY CAB DIRECTOR OF OPERATIONS. We thought it's a great idea, and we were really excited about being on the leading edge of this project here in Omaha.

Operators are saving about $300 a month in fuel costs per cab. That allows payback on the CNG conversion cost in about two years—a happy outcome for a Nebraska cab company doing its part to drive green. 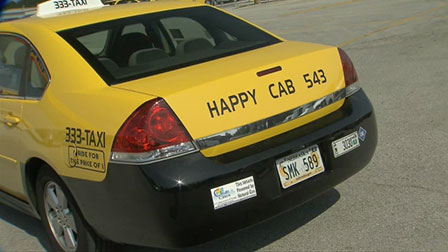