This is a text version of the video segment New York Broadens Network for Electric Vehicle Charging, which aired on May 18, 2013.

JOHN DAVIS: Our success story this week stops in Syracuse, New York, where this vibrant college town is all abuzz over electric vehicles. Already, a network of 68 charging stations has been installed throughout central New York. This strategic EV infrastructure, implemented by Syracuse Synapse Sustainability Trust, makes EV commuting between nearby cities easy and convenient.

A 22-kilowatt rooftop solar panel system helps power the nine Blink stations outside SST's headquarters. The project is partially funded by a DOE grant through the Clean Communities of Central New York coalition.

BARRY CARR: People will want to enjoy the lower cost benefits of using electricity as a motor fuel because the cost is about one-fifth of the cost of gasoline. 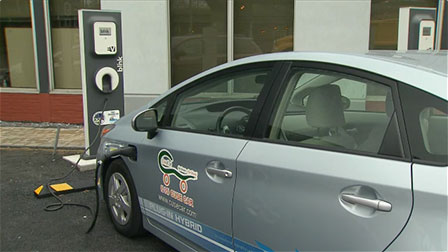