It's a cost-effective, more environmentally conscious way to go, and we feel that's how we want to run the operation.

The shuttle service first used propane fuel back in the 1990s, but switched back to gasoline due to the lack of available U.S. Environmental Protection Agency (EPA)-certified vehicle conversion options. After attending a Clean Cities event in 2008 and learning that the EPA-certified conversion options were readily available, the fleet started switching their shuttles back to propane. The entire fleet was running on bi-fuel vehicles by 2015. Company officials say they prefer propane over diesel, citing a fuel cost savings plus lower emissions and maintenance costs.

"It's a cost-effective, more environmentally conscious way to go, and we feel that's how we want to run the operation," said Don Duvernay, Airport Shuttle general manager.

The shuttle service replaced more than 67,000 gallons of gasoline with propane in 2015. Working with the Southeast Louisiana Clean Fuel Partnership and through grants provided by the U.S. Department of Energy, the fleet is boosting the shuttle's role as a green welcoming committee for visitors to the Crescent City. 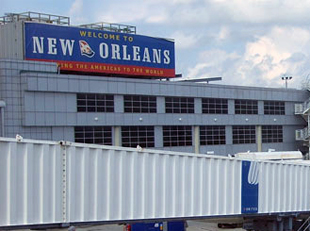