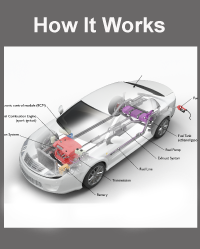 Flexible fuel vehicles (FFVs) have an internal combustion engine and are capable of operating on gasoline and any blend of gasoline and ethanol up to 83%. E85 (or flex fuel) is a gasoline-ethanol blend containing 51% to 83% ethanol, depending on geography and season. According to IHS Markit, as of 2017, there were more than 21 million FFVs in the United States. Because FFVs are factory made and are capable of operating on gasoline and gasoline-ethanol blends, many vehicle owners don't realize their car is an FFV and that they have a choice of fuels to use. Visit Fueleconomy.gov to learn how to identify an FFV or use the Alternative Fuel and Advanced Vehicle Search to find current FFV models.

Other than an ethanol-compatible fuel system and a different powertrain calibration, FFVs are similar to their conventional gasoline-only counterparts. While fuel economy (miles per gallon) is generally lower with increased levels of ethanol (due to the lower energy content in ethanol as compared to gasoline and because the engines are optimized for gasoline), many FFVs have improved acceleration performance when operating on higher ethanol blends. For additional information on the fuel economy and performance of FFVs, see Effects of High-Octane Ethanol Blends on Four Legacy Flex-Fuel Vehicles, and a Turbocharged GDI Vehicle.

For fleets that have to comply with federal acquisition regulations, FFVs are considered alternative fuel vehicles (AFVs) under the Energy Policy Act of 1992.