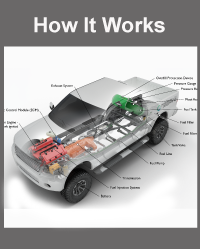 Propane, also known as liquefied petroleum gas (LPG), or propane autogas, is considered an alternative fuel under the Energy Policy Act of 1992. According to the Propane Education & Research Council, there are nearly 60,000 on-road propane vehicles with certified fuel systems in the United States. Many are used in fleet applications, such as school buses, shuttles, and police vehicles.

Propane vehicles are available from original equipment manufacturers (OEMs) or via a conversion. Propane engines and fueling systems are also available for heavy-duty vehicles, such as step vans and school buses, including some prep-ready engines from OEMs.

Propane vehicles have been widely used and refined for decades, and a propane vehicle's power, acceleration, and cruising speed are similar to those of conventionally fueled vehicles.

There are two types of propane vehicles: dedicated and bi-fuel. Dedicated propane vehicles are designed to run only on propane. Bi-fuel vehicles have two separate fueling systems, enabling the vehicle to run on either propane or gasoline. This provides the flexibility of using either fuel, which typically provides bi-fuel vehicles a greater range than dedicated propane or gasoline vehicles. Extra storage tanks can increase range, but the tank size and additional weight affect payload capacity.

Because a gallon of propane has 27% less energy than a gallon of gasoline, the fuel economy of propane vehicles is slightly lower. However, propane has a higher octane rating than gasoline (104–112 compared to 87–92 for gasoline), and some OEMs offer dedicated engines optimized to take advantage of this higher rating. This can result in improved performance and fuel economy over non-optimized engines.

The potential for lower maintenance costs is one reason behind propane's popularity for use in light- and medium-duty vehicles, such as trucks and taxis, and for heavy-duty vehicles, such as school buses. Propane's low carbon and low oil contamination characteristics may result in longer engine life. Propane performs well in cold weather climates because the fuel's mixture (propane and air) is completely gaseous when it enters the injection system and engine. This factor allows propane-powered vehicles to avoid many cold-start issues associated with using diesel.

Propane Laws and Incentives by State