We're very proud to be an example of what the National Park Service can accomplish.

For more than 15 years, the park has had a strong sustainability and environmental management program, following the requirements of federal legislation as well as National Park Service (NPS) and Department of the Interior policy and guidance. The program includes goals and actions to reduce energy use, water use, solid waste, and greenhouse gas (GHG) emissions.

As part of the program, park management began a fleet rightsizing effort in 2003, replacing conventional gasoline and diesel vehicles with smaller, lighter vehicles that use less fuel. The following year, San Antonio Missions achieved ISO 14001 certification for environmental management systems (EMS) from the International Organization for Standardization, the world's largest developer of voluntary international standards. One of the park's EMS goals was to improve the efficiency of fleet operations and sustainability through continued rightsizing and the adoption of alternative fuel vehicles and equipment.

David Vekasy, the park's chief of facility management, first learned of the availability of propane-fueled mowers in 2006, when the Alamo Area Clean Cities Coalition (AACCC) invited him to attend a Clean Cities alternative fuels event in Austin. Other similar events followed, enabling him to become increasingly familiar with the options in landscaping operations. "I'm grateful to them for the opportunities they gave us to find out about the mowers," Vekasy said. "Park staff was able to meet and talk with others already using the equipment, operate it firsthand, and learn more about the benefits of propane-fueled equipment."

Boosted by this knowledge, San Antonio Missions NHP began taking steps to replace all of its gasoline-powered grooming mowers. Vekasy solicited feedback from his staff, assessed the availability of local service technicians, researched available products and fueling infrastructure options, evaluated life cycle costs, and explored potential funding sources for equipment purchases. At the time, most fleets that pursued this technology were converting existing gasoline mowers to propane operation, because manufacturers were only just beginning to offer OEM factory models that ran on propane. There are now many OEMs offering propane commercial lawn equipment.

At the outset, acceptance by equipment operators was one barrier to switching to propane mowers. "The grounds staff was initially reluctant to accept a new technology, and therefore voiced reservations about everything from not knowing how to operate or maintain the units to perceived safety concerns," Vekasy said. "Sometimes, doing the right thing is not the easiest thing." During the following few years, each of their concerns was addressed individually by contacting the equipment designers and engineers, safety professionals, the Propane Education and Research Council, and national Clean Cities and NPS support staff. Grounds staff also had a chance to test drive the equipment.

In 2008, funding was authorized through the Intermountain Regional Equipment Replacement program. The formal procurement process was initiated in April of that year, resulting in two propane-powered 72-inch mowers that arrived in July. Subsequently, AACCC and Metro Lawn, a third party, helped arrange for the remaining conventional mower to be converted to propane operation at no cost to the park. In 2016, the park added a fourth propane mower to the fleet as part of the Intermountain Regional Equipment Replacement program.

These four units are still in operation today as the park's entire fleet of grooming mowers. The mowers' range is greater than that of the conventional equipment they replaced, so staff no longer has to interrupt their mowing operations to travel to a fuel stations for fill-ups, saving valuable time for other grounds duties. "The staff is very happy with them," said Vekasy. The gasoline mowers had used about 800 gallons of fuel per year, so the switch to propane has enabled the park to reduce its consumption of gasoline by 8,000 gallons over the past ten years. The propane mowers are estimated to eliminate some 27,000 pounds of well-to-wheel carbon dioxide emissions and 165 barrels of petroleum over their estimated 15-year lifecycles.

Becoming a Model for Alternative Fuels

San Antonio Missions NHP has become a strong example of alternative fuel deployment. "They really embody what Clean Cities is all about," said Yliana Flores, former AACCC coordinator. "And they've been big supporters of Clean Cities, providing us with valuable feedback." Since the park staff first began its fleet sustainability initiative, it has managed to reduce its fleet size by 18%. Through funding from the Clean Cities National Parks Initiative, the park purchased two propane pickup trucks and installed a propane fueling station and two plug-in electric vehicle (PEV) chargers. As of mid-2018, the alternative and advanced vehicles in the overall vehicle and equipment fleet included three hybrid SUVs, five propane pickup trucks, one neighborhood electric vehicle, a PEV sedan, one propane forklift, three electric utility vehicles, and one compressed natural gas (CNG) bi-fuel pickup truck. Vekasy said that nearly 50% of the park's vehicle fleet currently runs on alternative fuels. And the park has plans to build on its progress, with the goal of adding about one alternative fuel vehicle (AFV) to the fleet per year.

With the addition of each AFV model, the park seizes the opportunity to engage with visitors about sustainable transportation. The park features exhibits and signs that describe new fleet models and fueling infrastructure. When the park first deployed the mowers, interpretive tour staff included mentions of them into their talks--along with messages about recycling and water conservation. These messages were intertwined with the themes of the missions' history of sustainability. Vekasy also developed an exhibit at the PEV chargers to educate visitors about the vehicles and infrastructure. The park's interpretation staff also developed graphic wraps for one of their hybrid SUVs and the PEV sedan. The vehicles are used in local parades each year, providing an opportunity to demonstrate the park's use of sustainable transportation.

Vekasy said that the mower project has had a positive influence on park staff, other NPS units, local municipality grounds leaders, and park visitors. With the implementation of the propane mowers, the park has become a local leader in the deployment of propane in landscaping operations and has hosted and/or participated in multiple media and educational events with AACCC. For example, the park hosted annual commercial propane mower educational events for several years. The gatherings, in partnership with AACCC, gave attendees a chance to test drive propane landscaping equipment and get an up-close look at the latest technologies.

The progress has not gone unnoticed. In January 2013, San Antonio Missions NHP became the first national park in Texas to meet the requirements of the Climate Friendly Parks (CFP) program. CFP is one component of the National Park Service Green Parks Plan, an integrated approach by NPS to address climate change through implementation of sustainable practices. The park continues to pursue projects in this area, including a recent effort to install solar panels on the roof of the visitor's center.

"We're very proud to be an example of what the National Park Service can accomplish," Vekasy said. And by taking the lead for the future, San Antonio Missions NHP is preserving its past. 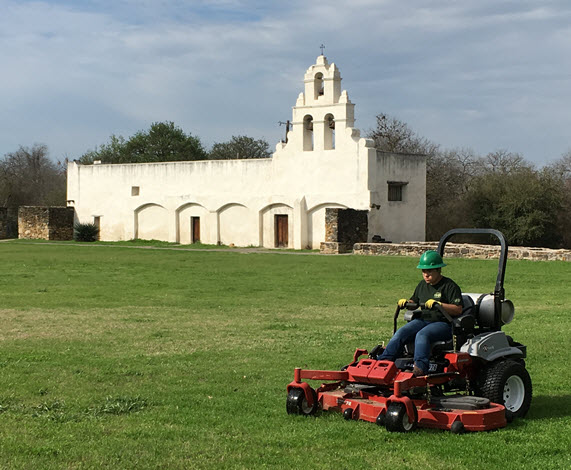