Infrastructure availability is the foundation for the acceptance of any fuel. Fleet managers depend on being able to locate fuel at a station that meets the needs of their fleet within a reasonable distance at a competitive price; propane infrastructure for vehicles is well established across the United States.

The Alternative Fueling Station Locator allows users to search for public and private propane fueling stations and prioritize those stations that have vehicle-specific fueling capabilities. Users can suggest new propane stations for inclusion in the Station Locator using the Submit New Station form. 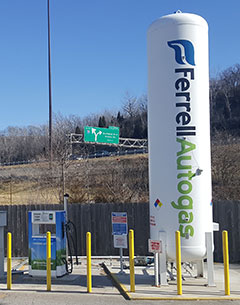 Propane dispensers can be placed alongside gasoline, diesel, or other alternative fuel dispensers. The infrastructure needed for propane is very similar to that for gasoline and diesel, although propane is delivered to the vehicle under pressure so that it will remain a liquid. Propane is transported to a site via a delivery truck and put into on-site storage tanks, traditionally aboveground. 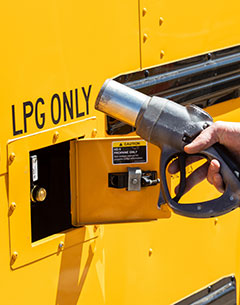 A typical propane fueling station will have a dispenser equipped with a hose and nozzle or connector. Fueling a propane vehicle requires attaching the nozzle to a connector on the vehicle. The National Fire Protection Association (NFPA) Code 58 (2017 version) requires all new vehicles to be equipped with the quick-release “Type K15” connector beginning January 1, 2020. The associated Type K15 nozzle allows for one-handed fueling, does not require the use of personal protective equipment, such as gloves and face shield (which are required for the older ACME connector), and limits fugitive emissions during disconnection. The ACME QCC screw-on connector has been used since 1994 for both vehicles and bottle filling. For vehicles with the ACME connector, there is an adapter for the Type K15 nozzle. However, people considering vehicle purchases should be sure to order the correct connector to be compatible with their planned fueling dispenser.

As with any fuel, it is important to know and consider the safety guidelines when establishing infrastructure. This includes the CSA Natural Gas and Propane Installation Code B149.5-15, which contains requirements for the placement of propane fuel systems and containers in vehicles, and NFPA 58 Vehicular Liquefied Petroleum Gas Code, which applies to the design and installation requirements of propane fueling facilities. Your local fire marshal can advise whether local permits are needed for installations. In addition, your local propane supplier can help determine the right amount of storage needed to adequately meet vehicle fueling needs.

Building a New Station: Many suppliers offer an inexpensive lease of the tank, pump, and dispensing equipment in return for a fuel supply contract. In these cases, the station owner or fleet is responsible only for the cost of equipment that cannot be removed from the site when the fuel contract expires, such as the electricity line or the concrete pad for the storage tank. This can make the upfront cost of propane infrastructure very affordable. The cost of establishing private infrastructure, as opposed to a lease, includes purchasing and installing the necessary equipment for storing and dispensing propane. This cost can be as low as $40,000, varying based on the current infrastructure (e.g., electric connections and concrete pad) and need.

Upgrading Existing Retail Sites: Most propane vehicles can fuel at existing retail sites that sell propane in small volumes, such as for filling grill canisters and mowers. Propane vehicle fueling is considered a "secondary" service at stations with dispensers intended for small propane filling applications. While these stations can fuel propane vehicles, they have limited vehicle-specific fueling capabilities. Upgrading dispensing equipment at those sites to a retail-style metering dispenser that is dedicated (or purpose-built) for vehicle fueling and has a card reader may accommodate broader vehicle fueling and drive demand. The pump may also need an upgrade to provide a faster fill rate—ideally 8 to 12 gallons per minute or more—and adequate fill pressure for vehicles. Stations with these upgrades may consider propane vehicle fueling a "primary" service.

Station owners and fleet managers committed to a seamless fueling experience for their drivers may also wish to invest in other equipment, such as a fueling canopy or a hose retractor. With these improvements, propane drivers will have an experience similar to fueling a gasoline vehicle at a conventional station. Station owners may choose to make these investments based on demand in their area and fleet interest in propane. Upgrade construction can take as little as four to six weeks.