It is 100% about the driver experience. We want the stations to have the right aesthetics and for the customer to feel comfortable while fueling.

Clean Cities coalitions along the East Coast are working with Sharp Energy, a propane gas company, to ensure propane fueling stations have what stakeholders need.

Sharp Energy, a subsidiary of Chesapeake Utilities Corporation, is based in Georgetown, Delaware. The company primarily serves the Mid-Atlantic region but is expanding across the country.

“Clean Cities support has been incredibly valuable. We have a great relationship with the Eastern Pennsylvania Alliance for Clean Transportation [EP-ACT], which has allowed us to connect with fleets in that area,” said Eric Mays, director of marketing at Sharp Energy.

The coalitions are happy too. In 2019, EP-ACT presented Sharp Energy with its Industry Support Award, recognizing the company’s “immediate and consistent action in placing alternative fuel vehicles, fuel supply or technologies on the road within EP-ACT’s territory and for promoting the entire alternative fuel industry.”

A primary consideration for Sharp Energy is ensuring propane vehicle drivers have a seamless fueling experience—one that mirrors gasoline fueling as closely as possible. Working with Clean Cities coalitions gives the company a direct line to understanding the customer experience because of coordinators’ close relationships with propane stakeholders.

“It is 100% about the driver experience,” Mays said. “We want our propane stations to have the right aesthetics and for the customer to feel comfortable while fueling.”

All the company’s public propane fueling stations are considered “primary stations,” based on the U.S. Department of Energy’s (DOE) Alternative Fueling Station Locator criteria. Specifically, stations with the primary designation must be open during regular business hours and must not require drivers to call ahead to fuel. Primary stations also have to accept credit cards or fleet cards as a payment type. Lastly, primary stations need to be able to fuel vehicles at a rate similar to filling a gasoline vehicle, which is about 8 to 12 gallons per minute or faster.

Four of Sharp Energy’s stations have an on-site attendant to fuel vehicles during normal business hours. The company categorizes an additional 14 stations as “multi-fleet” because of the training requirements necessary to fuel at the stations. The National Fire Protection Association (NFPA) Code 58 requires operators of propane stations to be trained—similarly to natural gas. As a result, Sharp Energy’s customers—largely fleets—must attend a classroom presentation of the Propane Education and Research Council’s Dispensing Propane Autogas training program and complete on-site fill training to operate the station. Drivers are then free to access the station 24 hours a day, 7 days a week, using a card key. For payment, drivers can use a credit card or their fleet fueling card.

Investing in the Right Equipment

Finding the most user-friendly equipment is an ongoing effort for Mays and his team. With nearly 90 propane vehicles in their fleet, Sharp Energy knows the potential pain points for customers. Working with Clean Cities provides a more direct line into understanding and overcoming these pain points.

The company prioritized the new, quick-release “Type K15” dispenser connector over the ACME QCC screw-on dispenser that has been used since 1994 for both vehicles and bottle filling. NFPA 58 requires that all new propane vehicles be compatible with the quick-release dispenser as of January 1, 2020. The quick-release model limits emissions while fueling, allows for one-handed fueling, and does not require the use of personal protective equipment. As a result, that customers feel safer using the fueling equipment.

In keeping with Clean Cities guidance, Sharp Energy has also upgraded their stations to include hose retractors, similar to a gasoline pump. “Practically and aesthetically, the hose retractor is much better than letting the hose get in the way of the driver or their vehicle,” Mays said.

Finding the right horsepower for their pumps has been a balancing act. Sharp Energy initially installed 5-horsepower (HP) pumps on their stations, to achieve a differential pressure that would allow drivers to quickly get a full fill. However, the company found the pumps were too powerful for their purposes and regular operation was triggering the safety excess flow valve, presenting a reliability issue. As an alternative, Sharp Energy installed a 3-HP pump instead, which has adequate differential pressure but solved the safety excess flow valve issue. As an added benefit, the 3-HP pumps are quieter, further improving the fueling experience for drivers.

Propane fueling stations implementers can look for additional ways to ensure a positive driver experience. For example, including a small canopy allows drivers room to step out of the weather while they access the pump. Sharp Energy also offers an integrated fuel management system that allows fleet managers to see all their fuel transactions in one statement, along with information about individual vehicle fuel economy and other fuel management data.

Sharp Energy’s fleet customers are happy with their fueling experiences. “We currently run 30 propane school buses and our employees enjoy the ease and cleanliness of our Sharp Energy propane dispenser,” said Mitch Gunther, MGB Enterprises. “They just slide the card, enter the information, and push the nozzle on the bus. The pump does the rest. The monthly reporting system is also a great help when doing our internal reports.”

Of course, these improvements come at a cost. The investment can vary significantly based on whether the company is upgrading an existing station or building a new one, but a complete station build-out typically costs about $40,000 to $45,000. By identifying an “anchor fleet” that can commit to a fueling contract at the new station, Sharp Energy ensures that any new station will at least have a baseline throughput to justify the cost.

To further offset the cost, Sharp Energy has taken advantage of incentive programs in the states where they operate. In 2016, the Maryland Energy Administration awarded the company funding to cover 50% of the cost of two public fueling stations in Maryland—one in Easton and another in Stevensville. Mays and his team have also taken advantage of funding opportunities in Delaware and Pennsylvania.

The work does not stop after the initial investment. Mays also emphasizes the importance of ongoing station maintenance and operation efforts. This includes using high quality fuel, installing and routinely changing out filtration systems, stocking replacement parts, and having experienced mechanics available if something goes wrong.

“You have to be able to keep the stations running,” Mays said. “We have mechanics on staff that are trained on the equipment and electronics. If a station goes down, we have it back up and running as quickly as possible because customers are relying on us for their fuel.”

Clean Cities coalitions around the country have been valuable partners in Sharp Energy’s efforts. Specifically, the company relies on Clean Cities to help make connections and referrals to fleets interested in propane vehicles. As the company continues to expand across the United States, the Clean Cities Coalition Network will be integral in building connections with local fleets and exploring implementation plans for infrastructure growth.

“We have also worked with State of Maryland Clean Cities, doing presentations at their meetings and events, and we recently joined some of the Florida coalitions as well,” said Mays.

The coalition leader for the State of Maryland Clean Cities, Mike Jones, said, "Propane is a domestically produced fuel that reduces our reliance on imported petroleum, while lowering costs and emissions. Sharp Energy has been a great partner in helping deliver these benefits to our state." 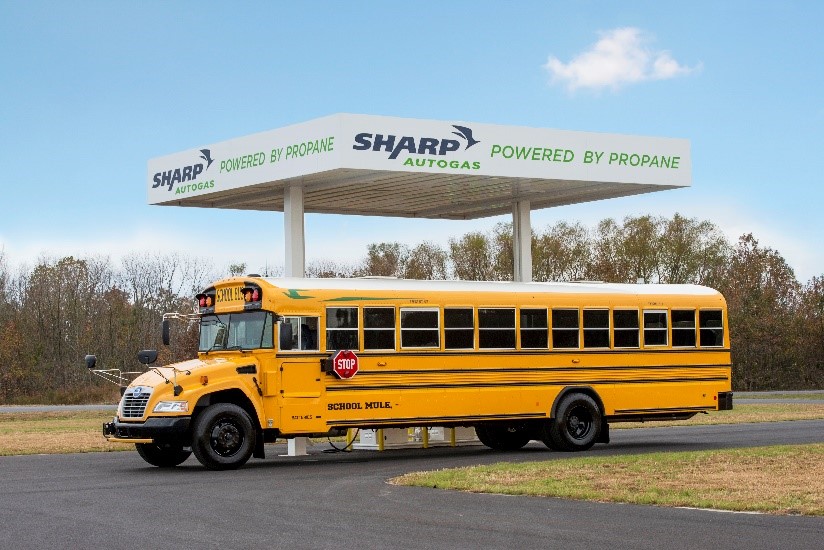