Municipality with a Mission: Georgia Fleet Commits to Alternative Fuels for the Long Haul

It is a municipal fleet manager's responsibility to be a good steward of the citizens that trust us to manage their tax dollars.

When it came to adopting alternative fuels into its fleet, Georgia's Cobb County Government didn't stop at one or two types of fuel. Over the past 15 years, the County has made it its mission to utilize six different alternative fuels, based on mission needs, with the goal of saving money, reducing its environmental impact, and increasing employees' satisfaction. Cobb County has successfully built an innovative fleet with a forward-looking focus, drawing upon its access to data, strategic partnerships, and information.

Cobb County attributes much of its success to its focus on what Al Curtis, director of fleet management, refers to as "mission-specific fuel use." Simply put, Curtis says this type of approach boils down to having a deep understanding of the particular fleet, as well as the needs of the customer, before committing to a specific fuel or technology.

The County took this approach when it found a niche for plug-in electric vehicles (PEVs) in its light-duty fleet, he said. As a result, employees now have access to 23 leased Nissan LEAF PEVs. Bi-fuel propane F-150 pick-up trucks assist with some of the County's larger transportation needs, while flexible fuel vehicles (FFVs) make up the police fleet. As E85 is currently priced higher than gasoline and available at limited sites in Cobb County, the County strategically uses E85 when the price is reasonable.

Biodiesel is yet another fuel the County has successfully incorporated into its portfolio. After attempting to use ultralow-sulfur diesel in 2007, fleet personnel began noticing issues related to the fuel's lubricity. They were able to solve the problem by switching to B5, a 5% blend of soy-based biodiesel certified to BQ- 9000 standards for quality. As a result, the County became one of the first municipalities in Georgia to use biodiesel at the majority of its fueling sites. In addition to solving lubricity issues, Curtis estimates that by switching from conventional diesel to biodiesel, the fleet has reduced its life cycle greenhouse gas (GHG) emissions by more than 51.9 tons in the past five years. Cobb County's commitment to alternative fuel goes beyond its fleet; the County's Public

It's clear that Cobb County's efforts have produced big results. With 21% of their 2,400 fleet vehicles capable of running on alternative fuels, the County has averted more than 450 tons of GHG emissions and is well on its way to meeting its goal of a 30%-40% alternative fuel vehicle (AFV) fleet. The County has also saved more than $358,000 in fuel, maintenance, and ownership costs since the year 2000. Curtis said he expects to save an additional $16,000 during the next two years as the fleet fully integrates new propane lawn mowers.

The motorcycles are used for patrol, as well as active searches. The bikes have quickly become a favorite among the officers, as they require little to no maintenance, quietly reach a top speed of 98 miles per hour, and have a range of 189 miles.

The benefits don't stop there. The public has expressed appreciation about the lack of tailpipe emissions and noise as they are enjoying local parks.

Despite its ultimate success, the process of incorporating alternative fuels and advanced technologies hasn't always been smooth sailing.

"Every success has had a challenge to overcome," Curtis said.

Cobb County first started working with Clean Cities back in 2008 when it began to convert some of its police fleet to propane. At the time, the County experienced setbacks with the conversion process and opted to decommission the project in 2010. However, Cobb County leaders realized the opportunity that propane could offer for cost savings and revisited the fuel in 2015 with improved conversion systems. Today, the County regularly runs 16 bi-fuel propane trucks that offer a 650-mile range with propane and gasoline combined. The vehicles have logged more than 90,000 problem-free miles and are projected to save the municipality $120,000 during a four-year period. Curtis says the bi-fuel vehicles have been particularly helpful in the Code Enforcement, Parks and Recreation, and Property Management departments.

Curtis is quick to point out that Cobb County's projects didn't happen in a vacuum; many years of collaboration with its local coalition, Clean Cities-Georgia, contributed to its overall success. For instance, Clean Cities-Georgia Coordinator Don Francis helped the fleet evaluate its options before investing any time and money in new fuels and technologies. He directed Curtis to the latest tools and calculators found on the U.S. Department of Energy's Alternative Fuels Data Center (AFDC) website as an appropriate first step for their project.

More importantly, Francis said, "We are able to connect our stakeholders--like Cobb County--to our partners in order to get things done." For example, when Cobb County made its decision to pursue PEVs, Francis connected Curtis to a local residential, commercial, and public PEV charging station company called Metro Plug-In. The company installed electric vehicle supply equipment (EVSE) at the County's facility. Francis was also able to assist Cobb County in securing a grant from the Georgia Environmental Finance Authority to help pay for the installation of 14 charging stations. Curtis values the recognition and attention Francis and Clean Cities have drawn to his projects, as well as the network and partnership opportunities that they bring. In addition to Metro Plug-In, Cobb County now has strategic partnerships with Nissan, Georgia Power, Marietta Power & Water, Cobb Electric Membership Corporation, ChargePoint, Blossman Gas, Georgia Natural Gas, and Hanna

Solar--all possessing the shared goal to expand alternative fuel use and save the county money.

"It is a municipal fleet manager's responsibility to be a good steward of the citizens that trust us to manage their tax dollars," he said.

Making the Case and Spreading the Message

In advocating for alternative fuels, Curtis has found fleet data to be invaluable. AFDC tools to calculate return on investment and emission savings have especially helped him make a compelling case to the county's management for AFV purchases.

In addition to having the approval of county officials, Cobb County understands the importance of AFV acceptance among vehicle end users. Cobb County uses a number of methods to educate and familiarize drivers with the vehicles, including ride-and-drive events with the local Nissan dealership. The County also hosts ongoing internal campaigns to inform employees about the environmental and economic benefits of AFVs. As a result, Cobb County departments are welcoming the vehicles with open arms, Curtis says. One of those cases is within Cobb Senior Services, where Executive Director Jessica Gill says her team's enthusiasm for the department's Nissan LEAF is clear. While the staff had initial hesitations about the vehicle's all-electric range, she said they quickly came to appreciate the technology, performance, and ease of charging.

"Now, the staff fight over who is going to get to use the electric car," Gill said.

Cobb County's impressive achievements are making an impact on other fleets as well. Leaders within the County's fleet regularly receive invitations to speak at industry events and share the County's AFV successes and challenges with other fleets. Curtis attributes Cobb County's forward-thinking approach to keeping a finger on the pulse of the alternative fuel industry.

"As a fleet manager it's easy to put blinders on and get stuck in the day-to-day grind, but it is important to get out there and see what options are available to save your fleet money," Curtis said.

As a result, others have also taken notice of the County's effort. Since 2000, Cobb County has received numerous awards for its fleet leadership, including being ranked 19th in 2016's 100 Best Fleets in North America list and 20th in the Green Fleet Awards list. The County was also named a 2016 Notable Fleet by Government Fleet Magazine.

Looking Forward and Moving Ahead

Despite all of its accomplishments, however, Cobb County is not about to rest on its laurels. The County's fire department recently leased seven more Nissan LEAFs and installed seven EVSE units, making Cobb County the first municipality in Georgia to add zero emission vehicles to a public safety fleet. Following an initial effort in the early 2000s, Cobb County is also investigating compressed natural gas (CNG) into its refuse trucks.

With its knack for innovation, it's more than likely Cobb County will continue to turn challenges into opportunities and lead the way for alternative fuels in municipal fleets and its community.

"The County's alternative fuel adoption shows staff and citizens that they do not need to be afraid of new technology," Gill said. "Local government support signals to the community the value and importance of reducing the municipal carbon footprint through alternative fuel use." 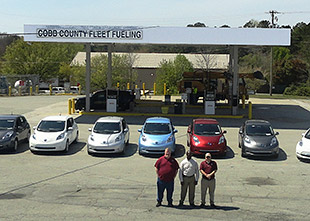