This is a text version of the video segment Goss' Garage Provides Tips for Using Ethanol in Classic Cars, which aired on May 1, 2012.

As our automobiles have evolved, so have the fuels that we use to propel them. And today, there's a different type of fuel on the market—primarily E10, which is 10% ethanol. And, of course, there is also E85, which is 85% ethanol.

Now, there's a basic rule here regarding these fuels. E10 is safe for just about anything on the road. E85, on the other hand, must only be used in automobiles that are flex fuel compatible. They have to be specifically designed to use E85. If you use E85 in a car that isn't designed for it, well, you could experience some pretty severe problems.

All right, but you look at the Internet these days, and you see all of these dire warnings about problems that result from using E10 in older vehicles. Well, yeah, E85—that wouldn't be the way to go. But E10 is safe for just about everything, including our old collectibles and classic automobiles.

You see, when they tell you on the Internet that you're going to kill the engine or do all of this serious stuff to the car, that really isn't true. Yes, there could be some issues—issues with parts inside the carburetor and things like that. Certain types of plastic, certain types of metal, and leather can be damaged over time by the use of E10.

Now, here is something you have to be careful of. A lot of you like to use NOS (new old-stock) parts for your older vehicles. Well, that's fine for things other than fuel system parts. On fuel system parts, use the latest and the greatest because that will be compatible with the current crop of gasolines out there.

Even down to things like the fuel hoses. They don't last forever. They have to be replaced. When you replace them, use the type that is compatible with ethanol fuels. That way, they will last their normal life. You won't have any issues.

But then, also you'll find that there are all kinds of ads for miracle chemicals that reverse the damage done by ethanol and things like this. Well, that's a lot of garbage to begin with because, if there was damage to the car, it would be a situation where there isn't any chemical that you're going to put in there that's going to replace the leather on an accelerator pump or the metal on a needle and seat or anything like that.

So disregard those things, but keep in mind that fuel treatments and fuel stabilizers are two different things. Fuel stabilizers keep the fuel from turning to a brown goo or varnish-like substance where the miracle fuel conditioners—well, maybe they work; maybe they don't. A lot of them are nothing more than snake oil.

So, when it comes to using E10 in an automobile, use common sense. It isn't going to destroy the car. And if you have a question or comment, drop me a line right here at MotorWeek. 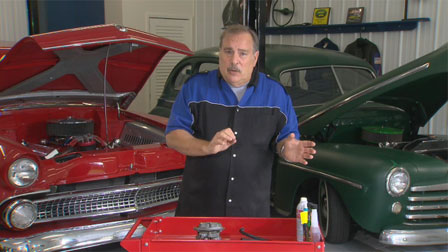