This is a text version of the video segment Coca-Cola Charges Forward With Hybrid Delivery Trucks, which aired on Aug. 18, 2012.

JOHN DAVIS: Our success story this week takes us to Atlanta, Georgia—headquarters of the giant Coca-Cola Company. As part of their commitment to the environment, Coke has added more than 750 hybrid electric delivery trucks to their U.S. and Canadian fleets.

The company's interest in hybrid vehicles started in 2001. Since then, they've worked with truck builder Eaton to develop platforms that meet their various direct store delivery needs.

This 35-foot trailer with regenerative braking works well for multiple stops. Coke says this large hybrid truck is the workforce of their fleet, but it isn't the only vehicle in their alt fuel lineup.

STEVE SALTZGIVER: The big benefit, of course, is our sustainability portfolio and the recognition that we get in the market from that. And probably the most important thing is we're doing the right thing. We're kind of enhancing our social license, so to speak, and promoting this technology that's out there.

JOHN DAVIS: The hybrid electric delivery trucks represent about 10% of Coca-Cola's overall North American fleet. Federal funds from the Department of Energy through the Clean Cities-Atlanta coalition helped with the acquisition. Advanced hybrid technology represents open happiness for the popular soft drink company and its many fans worldwide. 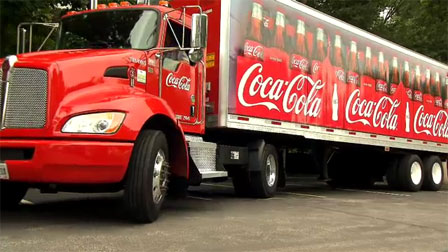