This is a text version of the video segment Delaware Reduces Truck Idling With Electrified Parking Areas, which aired on April 28, 2012.

JOHN DAVIS: Our success story this week takes us to Smyrna, Delaware, and the Chauncey O. Simpson memorial rest area on U.S. highway 13 where the big rig idle reduction movement is going strong.

To help eliminate wasteful idling, the state installed 24 electrified parking areas through a federal grant in partnership with the Delaware Clean Cities coalition. The units allow truckers to shut down their engines completely, providing heating, cooling, and access to cable and the Internet.

COLLIN O'MARA: Originally, we started it as an environmental initiative, but really it's becoming a cost initiative because they're spending about 50% less money than what they were spending before by having a cleaner alternative, so it's a win for the environment and a win for the budget.

JOHN DAVIS: If half of the power units are used for 10 hours per day, truckers will save 44,000 gallons of diesel fuel annually and eliminate 500 tons of CO 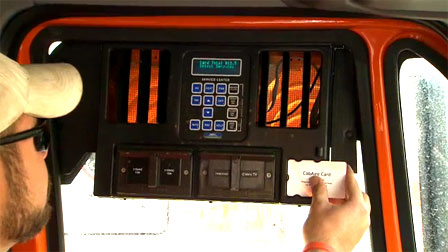