This is a text version of the video segment St. Louis Airport Relies on Biodiesel and Natural Gas Vehicles, which aired on Oct. 30, 2009.

JOHN DAVIS: Our success story of the week comes from Lambert-St. Louis International Airport. Lambert began experimenting with biodiesel in 1987. Today, they have close to 400 vehicles that run on B20, including light-duty trucks, runway sweepers, tow trucks, and front loaders. Their aircraft rescue firefighting units and emergency generator also run on the cleaner burning fuel. This biodiesel electric hybrid bucket truck is used to change out terminal lights.

The airport is also converting a majority of its gasoline-powered fleet to run on natural gas. This CNG station serves 35 shuttle buses and 60 airport maintenance vehicles.

MICHAEL BERNICH: We are trying to educate the public through the airport and through St. Louis Clean Cities by the use of biofuels by doing promotional stuff about us being able to help clean up the atmosphere in the area.

JOHN DAVIS: St. Louis is one airport where reducing the use of petroleum fuels has been a top flight priority for over 20 years. 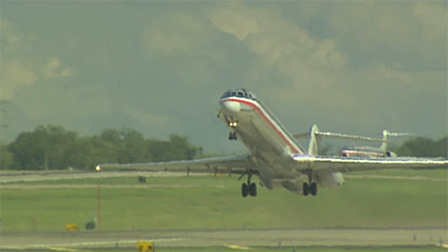