This is a text version of the video segment Atlanta Airport Converts Shuttles to CNG, which aired on March 29, 2014.

JOHN DAVIS: Our success story this week profiles an off site airport shuttle bus company in Atlanta, Georgia. The Parking Spot began adding 31 compressed natural gas buses to their three lots near the Hartsfield Jackson Atlanta International Airport over two years ago. The Parking Spot worked with the Clean Cities Georgia coalition to make the clean-fuel switch as part of a $40 million Metro Atlanta Petroleum Reduction Program, funded in part by the Department of Energy.

The Atlanta program included nearly $15 million in assistance to field over 200 alternative and advanced technology vehicles, six CNG refueling stations, and a landfill gas to renewable natural gas processing facility. Since 2012 the company estimates they have displaced over 725,000 gallons of petroleum fuel. It's a good spot to be in, as the company considers adding more alternative fuel buses to other Parking Spot locations around the country. 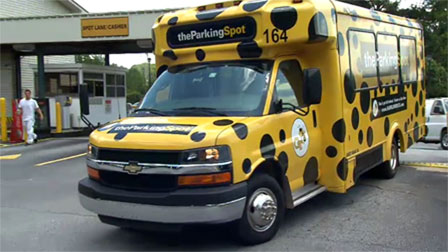