This is a text version of the video segment Natural Gas Minibuses Help New Jersey Recover From Hurricane Sandy, which aired on March 23, 2013.

JOHN DAVIS: Pelting rain, high winds, and surging water pummeled the Eastern Seaboard in November of 2012 as Hurricane Sandy chewed up the East Coast, leaving in its wake a swath of loss and destruction. In advance of this storm of the century, the demand for gasoline spiked as thousands were forced to evacuate, and many others stocked up on fuel for their portable generators.

After the storm passed, power outages and a crippled delivery infrastructure led to gas shortages that lasted for weeks, hindering cleanup efforts and paralyzing entire cities. Atlantic City, New Jersey, took a heavy toll in physical damage with numerous homes and boardwalk attractions damaged beyond repair. But thanks to a program began in 2009, the city's recovery began more quickly than most.

Atlantic City's main form of public transportation for nearly 100 years has been a fleet of owner-operated minibuses called Jitneys. With help from the U.S. Department of Energy through the Recovery Act, Atlantic City's Jitney bus operators were able to replace their aging fleet of 190 minibuses with new models running on clean, compressed natural gas fuel. As Hurricane Sandy approached, these vehicles were pressed into action for the evacuation. And because of their dedicated CNG fuel, the Jitneys were just about the only vehicles moving during and after the storm.

FRANK BECHTEL: Bay-front properties got whacked real bad, but the boardwalk that was damaged is right over there. The boardwalk actually came up through the force of the storm and relocated itself several blocks—some of it inside my garage. We saw on the news up in New York and Statin Island people were fighting over gasoline. We don't have price gouging. We didn't have fuel shortages. We never had an issue where the gas—where the fuel supply ran out. We never had an issue where a bus couldn't perform an emergency service or a convenience service because we weren't going to be able to get fuel. It was a complete, uninterrupted compressed natural gas supply.

JOHN DAVIS: In similar fashion, Hurricane Sandy showed other cities the unexpected benefits of switching their vehicle fleets to CNG fuel. The Long Island town of Oyster Bay, for instance, was able to keep its CNG-fueled refuse and dump trucks running throughout the storm—a critical factor in its cleanup efforts. As a result, more community planners and federal and state emergency management agencies are now taking a fresh look at alternative fuels as a key part of their energy assurance and disaster preparedness strategies.

CNG fuel stations are typically fed by an underground pipeline and so are not dependent on road-bound trucks for their fuel supply. On top of that, CNG fuel has a significant cost advantage over gasoline and diesel.

TOM WOODRUFF: The Jitney Association uses 540,000 gallons of fuel per year. In terms of dollars and cents, comparing the price of gasoline to that of compressed natural gas, we save about $1 million a year.

JOHN DAVIS: In Atlantic City, at least, CNG has allowed this community to come together and continue a tradition of looking out for one another.

FRANK BECHTEL: We're not government employees. We're not a big company. We're independent, individual owner-operators, and we're part of the community. And throughout our history for 100 years, whenever there was a fire or a building collapsed or any type of situation, the Jitneys were always the ones who evacuated the people, moved them to a Red Cross shelter—or any situation where people needed to be moved in an emergency situation—the city and the county calls on the Jitneys to move them. 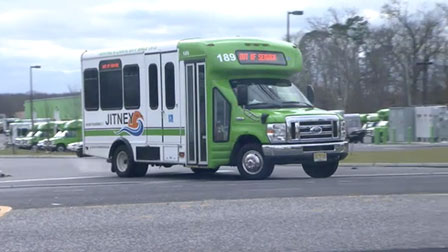