It has never been easier to migrate to natural gas vehicles. The network of natural gas fueling stations and the natural gas engine offerings are currently experiencing tremendous growth. Fleets should reach out to their Clean Cities coordinators to learn about incentives and potential partnerships that will help you make it happen sooner than you might think.

The prospect of transitioning a vehicle fleet to a new fuel can be daunting. But the City of Sacramento has proven that dedication, collaboration, patience, and a willingness to implement new ideas go a long way. Over the last 20 years, the city has successfully transitioned its entire diesel refuse-hauler fleet to clean-burning liquefied natural gas (LNG). The fleet worked with Sacramento Clean Cities, the local air district, and other fleets in the area to systematically roll out 113 side- and rear-loader LNG refuse trucks, as well as the fueling stations and maintenance facilities to support them. This effort has contributed to millions of dollars saved and more than 1,900 tons of annual greenhouse gas (GHG) emissions averted.

The City of Sacramento's fleet managers began researching feasible alternatives to conventional vehicles in 1997, in response to long-standing issues with their diesel refuse trucks and the rising cost of diesel fuel. They considered several factors, including payload and range requirements. After careful deliberation, the fleet settled on natural gas because of its financial and environmental benefits. It initially opted for LNG over compressed natural gas (CNG) because the LNG vehicles provided a longer range than their CNG counterparts. To help with the initial migration from diesel trucks to LNG trucks equipped with Cummins Westport engines, the fleet sought financial support from the Sacramento Metropolitan Air Quality Management District (SMAQMD). It also tapped Cummins Westport and vehicle manufacturers for driver and technician training and technical assistance.

The fleet started small, addressed questions and technical issues as they arose, and kept city decision makers informed of the project's progress. Before long, the city began realizing significant economic and emissions benefits from LNG use. Taking over as fleet manager in 2006, Keith Leech, who also serves as the Sacramento Clean Cities coordinator, was charged with building upon the initial success. Since 2010, the fleet has purchased 63 LNG refuse trucks.

As with any switch to a new fuel, implementing LNG in the City of Sacramento refuse fleet took extensive research and collaboration, particularly because it was one of the first fleets of its kind to consider LNG vehicles. Sacramento Clean Cities facilitated connections with other fleets in the area that had already tried or were interested in natural gas vehicles, including the County of Sacramento, which also uses LNG refuse trucks. "Sacramento Clean Cities brought together members of the community who had experience operating LNG trucks. By sharing experiences, we avoided mistakes and had a successful transition to alternative fuels. As we continue to add LNG vehicles to the fleet, this ongoing dialogue with other fleets has been invaluable," Leech said.

The incremental cost of the LNG trucks is significant, but the fleet found that up-front investments could be offset with local funding. "Even in times of budget cuts, there can be a business case for alternative fuels," Leech said. The City of Sacramento refuse fleet obtained funding from SMAQMD's Emergency Clean Air Transportation (SECAT) grant program, which helped to pay for the initial truck replacement. In 2008, the fleet financed the replacement of the remaining diesel refuse haulers. "We projected that the savings from reduced operating costs of the new LNG refuse trucks more than cover the annual finance payments on a five-year loan," Leech said. In addition, Leech implemented a tiered vehicle replacement plan to help manage the cost of vehicles.

The city also procured funding from SMAQMD to build an LNG station to fuel the vehicles. As of 2013, the refuse fleet used nearly 1 million gallons of fuel per year from its own LNG fueling site and a County of Sacramento site in nearby North Highlands. One essential step in the transition to LNG was to ensure that the fleet's facilities were equipped to handle the operation and maintenance of the vehicles. The city constructed a new LNG maintenance facility and then retrofitted an existing maintenance facility with the necessary methane detectors, alarms, and heating and ventilation equipment to keep up with the growing number of LNG vehicles.

The transition from conventional diesel to LNG refuse haulers has tangible advantages for the city in terms of cost and reduced maintenance, but the benefits don't stop there. According to Argonne National Laboratory's Alternative Fuel Life-Cycle Environmental and Economic Transportation (AFLEET) Tool, the use of conventional LNG refuse trucks in place of diesel-fueled refuse trucks reduces GHG emissions by approximately 3%. Always striving to reduce its GHG footprint, the fleet began fueling 14 of its vehicles with renewable natural gas (RNG) produced from food waste in 2013. As of 2018, the city uses renewable LNG at one of its fueling facilities, which has the potential to reduce GHG emissions by 6,770 tons annually.

The city's LNG trucks are significantly quieter than their diesel predecessors, reducing noise pollution during trash pick-up times. "This project is a great example for local government stewardship. Cleaner and quieter refuse haulers are operating in Sacramento neighborhoods, and this project saves taxpayers and ratepayers money," Leech said. The City of Sacramento's success has been widely recognized. Due in part to its commitment to natural gas and other alternative fuels, including E85 and propane, the fleet was named one of the "100 Best" government fleets in North America by Government Fleet Magazine every year from 2009 through 2015. In 2015, the City of Sacramento fleet was ranked as the No. 1 Government Fleet overall.

Never content to rest on its laurels, the city continues to implement new initiatives to cut fuel use and emissions, including stringent idle time limitations, renewable diesel use, and electric vehicle purchases. The city also continues to identify ways to extend the life of its existing natural gas refuse trucks, purchase new LNG and CNG models, and expand its LNG and CNG fueling infrastructure. 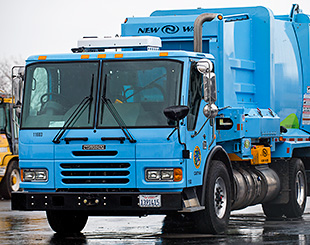