They were working around the clock. It was nice to see towns that had invested in CNG and biodiesel continuing to be able to pick up debris.

When Superstorm Sandy hit the East Coast on Oct. 29, it flooded streets, cut power, and stranded vehicles. Many drivers—including first responders—struggled to find diesel fuel or gasoline. Yet on Long Island, which suffered a direct hit, fleets of compressed natural gas (CNG) trucks and cars kept on rolling in the storm's aftermath, helping with recovery efforts. "They were working around the clock," said Rita Ebert, coordinator of the Greater Long Island Clean Cities Coalition (GLICCC). The vehicles were able to operate in part because the CNG fueling stations were equipped with back-up biodiesel generators.

"It was nice to see towns that had invested in CNG and biodiesel continuing to be able to pick up debris," Ebert said. Utility operators National Grid and Long Island Power Authority used their CNG cars and trucks for infrastructure repairs. GLICCC stakeholders began deploying the first CNG fueling stations some 14 years ago. There are now 12 publicly accessible stations and nine private or municipal stations on the island. Among the 21 are four added in 2012 in the Town of Oyster Bay and in Suffolk County, funded with help from the American Recovery and Reinvestment Act.

Ebert said the coalition has helped deploy between 700 and 800 alternative fuel vehicles now operating in the area. These vehicles saved 14.1 million gallons of petroleum in 2011. But there is more work to be done along Long Island's dense urban shipping corridors, which are traveled by some 28,000 fleets. CNG vehicles can drive from one end of Long Island to another with access to CNG, but according to Ebert, "we could use at least five more stations."

Ebert, who has been with the coalition since 2007, said the pace of progress is accelerating. As part of GLICCC's efforts to build on the momentum, the coalition is now working with the New York State Energy Research and Development Authority to identify where additional CNG stations are most needed. 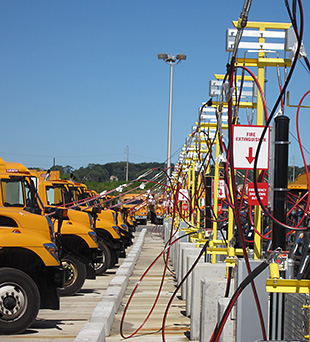