Rolling Down the Arizona EV Highway

Nissan and other EV manufacturers were counting on having the corridor done so that prospective EV drivers could feel confident that they would be able to make the trip up I-10 and have quick charging along the route.

Widespread deployment of plug-in electric vehicles (PEVs) requires community readiness efforts in a number of critical areas, not the least of which is the development of charging infrastructure. And on the open highway, charging must be convenient and quick. This was the motivation behind Arizona's "EV Highway," which took a major step forward with the installation of DC fast charging on Interstate 10 (I-10) between Phoenix and Tucson in 2013.

Collaborating with industry partners, Tucson Clean Cities Coordinator Colleen Crowninshield put together a local working group, inviting representatives from all city and county governments in the Phoenix-Tucson area. Valley of the Sun Clean Cities Coordinator Bill Sheaffer was also among the group's participants. With Crowninshield and Sheaffer's help, the group identified charging station locations and the types of charging equipment needed. Soon, several stations began popping up in both the Phoenix and Tucson areas. The group also identified the need for charging along the I-10 corridor. As of June 2018, there is a DC fast charger at a shopping mall in Casa Grande, approximately 50 miles from Phoenix and 65 miles from Tucson. DC fast chargers provide 60 to 80 miles of range in about 20 minutes of charging. In addition, there are several Level 2 stations along the route.

Crowninshield and Sheaffer engaged with charging network developers and original equipment manufacturers on this effort. "Nissan and other EV manufacturers were counting on having the corridor done so that prospective EV drivers could feel confident that they would be able to make the trip up I-10 and have quick charging along the route," Crowninshield said.

Continuing their collaborative efforts, Tucson Clean Cities is now working with the Arizona Department of Transportation (ADOT) to designate PEV corridors under the Federal Highway Administration's (FHWA) Alternative Fuel Corridor initiative. In 2017, FHWA designated I-10 between Phoenix and Tucson as "corridor-ready" for PEVs, recognizing the infrastructure that had already been installed along this route. Future Clean Cities and ADOT efforts will focus on I-10 from the New Mexico border to Tucson and from Phoenix to the California border, as well as I-17 from Phoenix to Flagstaff. FHWA designated these three corridors as "signage-pending" in 2017.

"Our initial EV Highway efforts paved the way for our state to submit nominations under the Alternative Fuel Corridor initiative," explained Crowninshield. "Those first few stations gave electric vehicle owners a sense of confidence that charging is available. They also showed the state that Arizona consumers are ready for electric vehicles."

Future efforts will include expanding the EV Highway south along I-19 from Tucson to Nogales, which is the border with Mexico, and installing charging infrastructure along other interstates in Arizona.

"Bill [Sheaffer] and I receive calls regularly from our Mexico partners asking for our assistance in ensuring charging infrastructure is available for travel from Mexico through to San Diego," stated Crowninshield. "Looking ahead, it will be exciting to see our early efforts expand to all five major interstates in Arizona." 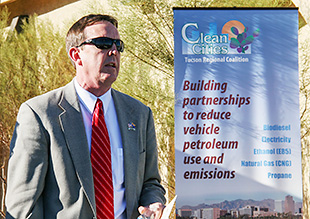 Project at a Glance
Vehicles: PEV
Fuel: Electricity
Infrastructure: Level 2 and DC fast charge
Motivations: Enabling PEV travel between Phoenix and Tucson, and along other highways in Arizona
Related Links
×