This is a text version of the video segment Alabama City Leads With Biodiesel and Ethanol, which aired on July 21, 2012.

JOHN DAVIS: Our success story of the week hails from Hoover, Alabama, where renewable biofuels reign supreme. Three hundred thousand gallons of E85 are consumed each year by their flex fuel police vehicles.

Hoover leads the state with 88% of their municipal vehicles using some type of advanced fuel, including biodiesel. Commercial B20 is used by their Public Works Fleet, but the city also makes their own biodiesel. Since 2007, a recycling program allows residents to drop off their waste vegetable oil for processing. Biodiesel fuels 40 municipal vehicles, including these city trolleys.

TONY PETELOS: We're collecting about 1,000 gallons a month from 21 small restaurants that don't have a means to dispose of the cooking oil and also our residents in the City of Hoover. We convert that into biodiesel.

JOHN DAVIS: Clearly, the City of Hoover is making it happen when it comes to biofuels. 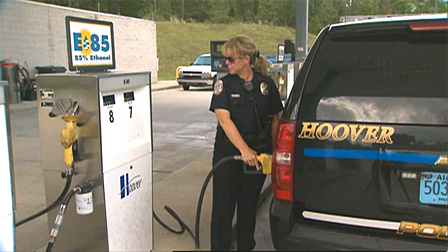