This is a text version of the video segment Landfills Convert Biogas Into Renewable Natural Gas, which aired on May 25, 2013.

JOHN DAVIS: Every family, farm animal, and food-processing plant in America produces organic waste that creates a mix of methane, CO2, and other elements called biogas when it decomposes. Rotten vegetables, moldy bread, last night's leftovers—they all break down when our garbage gets to the landfill.

Incredibly, for years, the majority of these gases have been simply vented into the atmosphere or flared off to get rid of them. But biogas can easily be converted into clean natural gas and used for generating electricity, heat, or transportation fuel. And a growing number of forward-thinking projects are doing just that.

Thousands of U.S. landfills, both active and long closed, are producing biogas in significant volume. For decades, Waste Management, the nation's largest recycler, has been capturing landfill gas to generate both electricity and fuel at over 100 locations.

This landfill in Livermore, California, takes in 3,500 tons of waste a day but also recovers enough gas to power 300 refuse vehicles. Organic materials can account for up to 60% of a landfill's intake, but diverting biomass elsewhere to produce energy can have immediate results.

Quasar Energy, an Ohio-based waste-to-energy company, has developed an innovative anaerobic digestion system that breaks down organic materials, such as food-processing waste, sewage, grease, fats, and oils to make renewable natural gas, as well as a natural soil conditioner to replace chemical fertilizers. Everything from expired potato chips to off-spec dog food has energy value and no longer gets thrown away as trash.

This facility in Columbus, Ohio, takes in 10 to 12 truckloads of biosolids each day. The material is pumped into large, oxygen-free silos, where microorganisms break down the waste and release biogas. This site alone produces about 3,600 gasoline gallon equivalents of natural gas each day, enough to generate its own electrical power and routinely fuel 30 trucks at its on-site CNG fueling station.

Quasar is looking to install digester systems onsite at food processors, wastewater treatment plants, or farms to reduce trucking costs and return the energy right back to its source. This model mimics a long-standing practice in Germany, where in a space the size of Montana, local farm co-ops have built more than 6,000 gas- and fertilizer-producing digesters.

But there are 8,000 dairy or swine farms in the U.S. large enough to support digester operations of their own. One example: Indiana's Fair Oaks Farm, harnessing the renewable energy output from 30,000 cows. Manure is processed and fed into this 18-foot-deep, underground, anaerobic tank. The resulting biogas is used for local power generation and yields enough CNG to fuel its fleet of 42 milk delivery trucks, displacing 2 million gallons of diesel fuel each year.

JOHN DAVIS: The importance of producing and using energy locally cannot be overlooked. Renewable fuels could potentially displace 10 billion gallons of oil annually. And that will certainly move us toward a clean-driving future. 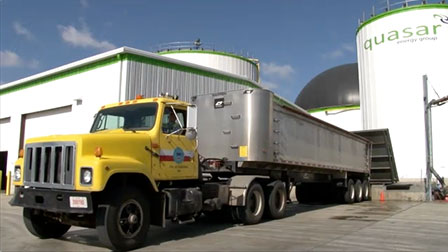