This is a text version of the video segment CNG Shuttles Save Fuel Costs for R&R Limousine and Bus, which aired on June 1, 2013.

JOHN DAVIS: Our success story this week follows a transportation company with a strong environmental focus. In 2008, Austin, Texas-based R&R Limousine and Bus first began using biodiesel in its fleet. Then last year, they purchased 12 compressed natural gas shuttle buses originally used to ferry attendees to both the Democratic and Republican National Conventions.

PAUL ARCEDIANO: It's not only cleaner, but it's also a lot more affordable. It's over $1 a gallon cheaper than diesel. Our company's going to use over $1 million in fuel this year, so that amounts to huge savings for us.

JOHN DAVIS: R&R is also adding CNG-powered SUVs to their fleet with state rebates partially offsetting conversion cost. And they hope to continue to green up their fleet for everyone traveling in and out of the Austin city limits. 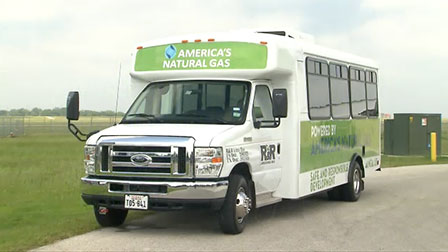