This is a text version of the video segment Propane Buses Help Minnesota Schools Carve out Greener Future, which aired on June 29, 2013.

JOHN DAVIS: Our success story this week takes us to Chaska, Minnesota, and the Eastern Carver County School District, where the switch to propane has fired up big savings. Eastern Carver County has begun the slow but steady process of replacing more than 100 diesel buses with ones that run on clean propane fuel. While the new buses cost more, the switch is already paying off with savings of $60,000 last year alone.

JOHN THOMAS: I think we have a great fleet here that's making progress for the environment. It's saving money for the school district so we can keep the money in the classrooms, and we're being a little progressive, and it's all the partnership between Eastern Carver County Schools and STA.

JOHN DAVIS: Student Transportation of America and their local affiliate, Positive Connections, teamed up with the school district to make the propane switch, helping Eastern Carver carve out a greener driving future. 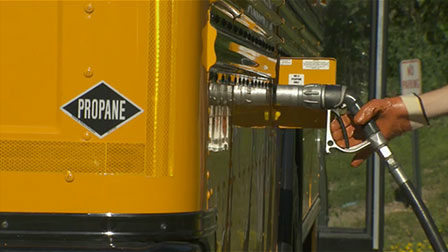