This is a text version of the video segment Kansas City Greens Its Fleet With Natural Gas and Biodiesel, which aired on Sept. 18, 2009.

JOHN DAVIS: Our success story of the week comes from Kansas City, Missouri. In 1996, KC instituted a fleet-wide alternative fuel program. Today, more than 200 compressed natural gas cars, trucks, and vans fuel up at the city's central CNG station. Also, their 1,100 diesels run primarily on B20 and B50 biodiesel. In June, Kansas City received the first 4 of 19 Diamond International trucks upfitted for CNG. Used to repair water main breaks, they are some of the largest rigs to run on CNG.

SAM SWEARNGIN: We're kind of proud of the fact that these trucks—the cleanest trucks you can buy on the planet that do what they do—are going to be operated right here in our neighborhoods.

JOHN DAVIS: And the alt-fuel program extends to the Kansas City International Airport, where 35 shuttle buses also run on CNG, all to make KC cleaner and less dependent on oil. 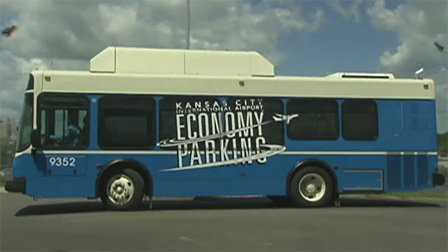