This is a text version of the video segment Golden Eagle Delivers Beer With Natural Gas Trucks, which aired on Aug. 3, 2013.

Converting to CNG at six other locations is underway. Beverage World Magazine named Golden Eagle National Fleet of the Year for 2012, so they're proud to show others how to keep cost and greenhouse emissions way down.

BILL OSTEEN: When we explored the cost benefits, the trucks cost more, but the fuel's a lot less. So in the trade-off, we were actually going to save money from day one.

JOHN DAVIS: To the tune of $50,000 in the first year. Working with Tucson Clean Cities coalition and CNG partner Trillium, Golden Eagle's in-house fueling station is also open for public use, so cheers to truly green beers. 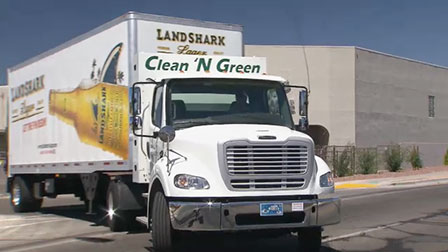