A forward-thinking community in Georgia is turning its trash into treasure and cutting greenhouse gas emissions in the process. The county sanitation trucks that unload solid waste at the Seminole Road Municipal Landfill in DeKalb County fuel up on renewable natural gas (RNG) produced from landfill gas (LFG) and dispensed on-site. A state-of-the-art energy facility converts the LFG to RNG.

"In a very real sense, our trucks are powered by the trash they are hauling," said Robert Gordon, superintendent of the DeKalb County Fleet Management Department. The new facility, which currently produces up to 2.1 million diesel-gallon-equivalents of fuel a year, was designed to accommodate future growth--or to double its fuel output over time. "Even if our 300-plus over-the-road vehicles and the entire sanitation fleet filled up on RNG--which is our plan for the future--we'd still only use about 1.5 million gallons a year," Gordon added. The county plans to sell any surplus gas, which would be distributed via the pipeline.

Through a partnership with Clean Cities-Georgia, DeKalb County received a $7.1 million American Recovery and Reinvestment Act award to help fund the new energy facility, a public-access natural gas fueling station, and 40 natural gas vehicles. "Sanitation Director Billy Malone was the driving force behind this project, which serves as a template for success for other landfills across the nation," said Don Francis, coordinator of Clean Cities-Georgia.

In addition to serving as sanitation director for DeKalb County's Public Works, Malone is the Solid Waste Association of North America's international board representative for landfills. According to Malone, 525 landfills in North America currently have the capacity to produce a combined 1 billion gallons of RNG per year, and they can do so under a five-year payback period for the construction of a processing plant. Methane gas collection is practical for landfills that are at least 40 feet deep with a minimum 1 million tons of waste in place.

"Processing natural gas from LFG helps displace imported oil, makes good economic sense, and is good for the environment," Malone said. "Ordinarily, LFG is burned off into the atmosphere, but why waste that energy when it can be used as transportation fuel?"

Landfills are the third-largest source of human-related methane emissions in the United States. Methane, which is 21 times more potent than carbon dioxide as a greenhouse gas, is a product of decomposing organic matter. Converting LFG to RNG reduces emissions by preventing methane release in the atmosphere and by displacing fuel from fossil sources that vehicles would otherwise use.

"My advice to other solid-waste fleets is to follow this example," Malone said. "Instead of flaring off landfill gas, process it for use as a renewable vehicle fuel--saving money, reducing emissions, and generating a long-term revenue stream that will continue for 30 years after the landfill is closed." 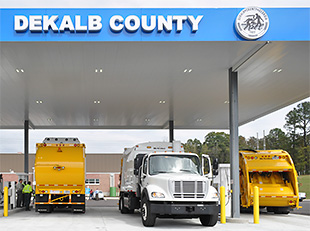