As of June 2017, our propane buses have traveled almost 125,000 miles, and the cost of propane runs approximately $0.50 cents less per gallon than diesel. Propane continues to be cost effective to our fleet.

School districts across the country have been under budgetary pressure for years, so it takes ingenuity to keep up with operational demands when resources are scarce. Charlotte Public Schools (CPS) in Charlotte, Michigan, is no different. In 2010, leaders of the semi-rural district were grappling with financial constraints, and there seemed to be no way to replace aging vehicles in their 20-bus fleet.

However, with the assistance of Greater Lansing Area Clean Cities (GLACC), the district was able to acquire five propane-powered Blue Bird buses, delivered in May 2012, and has since acquired three additional propane buses. GLACC helped Charlotte officials get support through EPA's National Clean Diesel Funding Assistance Program. The district, as a subrecipient on the grant, received $108,125 and committed roughly $338,500 in matching funds for the new buses. CPS funded its own on-site propane fueling station.

GLACC assisted the district by evaluating which alternative fuels would work best for its fleet, providing guidance on how to approach the bidding process, and informing it of options to dispose of old buses.

CPS says it's saving money with propane, given that fuel costs for the new buses are less than half those of their diesel counterparts. "As of June 2017, our propane buses have traveled almost 125,000 miles, and the cost of propane runs approximately $0.50 less per gallon than diesel. Propane continues to be cost effective to our fleet." said Kathleen Vance, CPS transportation director. Pleased with the savings and the emissions benefits, along with having an on-site propane fueling station, CPS plans to acquire additional propane buses as its diesel buses come due for replacement; officials hope to someday run the entire fleet on propane.

Beyond the expected monetary benefits, the project is yielding other dividends. The bus drivers say they love the propane vehicles, and CPS is proud to serve as an example for other districts in the region, as word of the project's success spreads. The GLACC team created educational materials for Charlotte to distribute to parents and other community members, and CPS transportation staff is available to consult with other fleets. 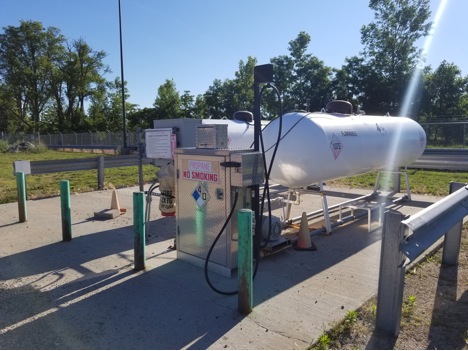