We are always looking for ways to integrate sustainable practices into every part of our operation.

The millions of visitors who stroll the National Mall and Memorial Parks in Washington, D.C., each year may soon notice some new attractions alongside the park's iconic monuments. With help from the Clean Cities National Parks Initiative and Greater Washington Region Clean Cities Coalition (GWRCCC), the National Park Service (NPS) is showcasing alternative fuels and advanced vehicles in and around the historic space between the U.S. Capitol and the Lincoln Memorial.

The National Mall recently added the first two plug-in electric vehicles (PEVs) to its 150-vehicle fleet. The park will install four PEV charging stations, two of which will serve fleet vehicles at the park's headquarters near the Jefferson Memorial; two more will be for public use, soon to be placed in locations that maximize accessibility by PEV drivers. In addition, idle-reduction technologies will be installed in 20 of the park's vehicles most often prone to idling, such as larger trucks involved in maintenance operations. Visitors can learn about these green transportation efforts through interpretive signage and educational talks by NPS staff.

A third strategy—deployment of six propane lawn mowers donated by the Propane Education & Research Council (PERC)—is expected to cut greenhouse gas emissions in half, relative to the diesel mowers they replaced in the park's 16-mower fleet. GWRCCC assisted in establishing the partnership between PERC and the park administration. "We are always looking for ways to integrate sustainable practices into every part of our operation," said National Mall and Memorial Parks Superintendent Bob Vogel. "This generous donation helps us do just that."

Leaders from NPS, Clean Cities, PERC, and GWRCCC held a ribbon-cutting event in June to unveil the new vehicles and charging infrastructure. "The mission of Clean Cities is really to work with local communities who want to implement these alternative fuels," National Clean Cities Director Dennis Smith said. "If we can get the millions of parks visitors to go home and understand that they can do the same thing, then it's really a home run."

GWCC Executive Director Ronald Flowers said, "To me, it's about energy independence." Noting the impact of this leadership at the high-visibility National Mall, Flowers said, "It's a perfect place for alternative technologies to really come to the fore." 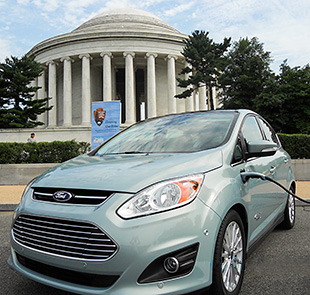