This is a text version of the video segment Clean Cities Celebrates 15th Anniversary, which aired on March 4, 2009.

The video opens with a picture of John Davis standing by two cars.

JOHN DAVIS: "As more alternative fueled vehicles and clean technologies enter the mainstream, the path to our clean driving future is becoming more well-defined. But we didn't get to this point overnight. It has taken years of work by unsung environmental heroes in groups like the U.S. Department of Energy's Clean Cities program, to build awareness and demand for clean, efficient transportation alternatives. Now those efforts are paying off… at the gas pumps and on the streets."

Logos of Auto World and Clean Cities appear over the top of a picture of a highway. It shifts over several scenes showing a man pumping gas, a researcher, people working on computers, a Roush truck, and a fuel cell pavilion.

(John Davis Voiceover)
Created in response to the Energy Policy Act of 1992, the Clean Cities program is a voluntary consortium of government agencies and private companies working together to improve air quality and reduce our reliance on petroleum at both local and national levels.

The picture shifts through several scenes of people handing out brochures, talking to other people, setting out a "Free Fuel Today" sign, and pumping gas.

(John Davis Voiceover)
To accomplish that lofty goal, Clean Cities started forming a network of independent community-based coalitions a little over 15 years ago , each tasked with encouraging the use of cleaner alternative fuels in place of conventional petroleum fuels in their area.

A graphic of a U.S. map appears over a picture of a gas pump. Dots appear on the map where the Clean Cities coalitions are located.

A video of Sam Spofforth appears. As Sam talks, a logo of Auto World and a caption saying "Sam Spofforth Clean Cities Ohio" appears underneath his picture. The picture shifts to scenes showing a propane bus being fueled and driven.

SAM SPOFFORTH: "It's natural gas, it's propane, it's hybrid electric vehicles, dedicated electric vehicles, biofuels"? "We really cover the whole range and we do a combination of working with fleets, working to get more availability of all these fuels and we do education and policy work as well."

The picture shows the U.S. Capital with cars driving in front of it. A graphic appears over the top of the capital that says "Federal Funds Multiplied - 25:1." The graphic changes to say "One billion plus raised from 5,700 stakeholders." Pictures of cars, buses, and trucks flow across the screen.

(John Davis Voiceover)
Federal competitive grants have helped kick start these efforts, but over the past 15 years, the Clean Cities program has leveraged those government dollars for maximum impact at an incredible ratio of 25 to 1, with over a billion dollars invested by over 5,700 stakeholders to date - car makers, utilities, local governments, commercial fleets, fuel suppliers and transit agencies.

A group of people are standing in a circle outside a fueling area, listening to someone talk. The camera pans down over a gas station sign showing the price of E85 and biodiesel.

(John Davis Voiceover)
And the results are equally impressive: 580,000 new AFV's on the road, the equivalent of over 2 billion gasoline gallons of petroleum displaced through alternative fuels and clean technologies, idle reduction, and over 6000 stations now offering alternative fuels like E85, biodiesel, natural gas, propane, and even hydrogen to the public.

JEFFREY RADER: "One of the greatest early wins that we had was the ability to get our transit system locally, the Metro Atlanta Rapid Transit Authority, MARTA, to commit to taking their fleet, first a small part of the fleet, but ultimately over 400 buses to be CNG."

The scene shifts between views of natural gas and hybrid electric buses. A car sits in a garage at a testing facility with its wheels spinning. Researchers look at computers and watch the car.

(John Davis Voiceover) And Atlanta is not alone. Transit fleets across America are switching to Natural Gas and other clean non-petroleum based fuels. In 1997, only 6% of U.S. buses used alternative fuels. Since then, that number has jumped to 20% and over half of those can be credited directly to efforts by Clean Cities coalitions.

(John Davis Voiceover)
To provide essential technical support, The U.S. Department of Energy conducts research, compiles mountains of alt fuel data and presents this information in print and online. The Alternative Fuels and Advanced Vehicles Data Center has info on laws and incentives, background on all types of alternative fuels and locator tools for finding and mapping fueling stations. The fueleconomy.gov Web site is the source for real-world fuel mileage data, air pollution ratings, and safety data to help car buyers choose the cleanest vehicles that fit their needs.

People are on a stage shaking hands and receiving recognition. The scene shifts to a ribbon cutting ceremony at a fueling station.

(John Davis Voiceover)
But despite its tremendous growth, Clean Cities is still very much a grassroots operation at heart, celebrating victories one ribbon-cutting at a time, and relying on each other for much needed support.

A video of Kellie Walsh appears. As Kellie talks, a logo of Auto World and a caption saying "Kellie Walsh Clean Cities Indiana" appears underneath her picture. The picture shifts to scenes showing researchers, a person driving a mower, a fueling station, and people working on equipment.

KELLIE WALSH: "I'm the Executive Director. It's kind of me, myself and I are the staff. We have a board of 11 that I report to and bounce the big things off of and keep up to date as to what's going on and so forth. But, the in and out daily activities, it's myself?and that's where working with the Department of Energy and working with NREL and the consultants and all the groups that support Clean Cities, makes it feel like I have a staff of 20 or more, because I can really utilize their experience, their expertise in helping me pull together the things that I do there in the coalition."

A series of scenes appears showing people talking to each other, a stack of brochures, and a person filling a car with fuel.

(John Davis Voiceover)
The idea of government empowering local citizens to be agents of change for the common good is an innovative approach that has exceeded all expectations. Aside from wartime patriotic campaigns, no other government program in recent memory has fostered as much enthusiasm for a single cause.

A video of Tom Gross appears. As Tom talks, a logo of Auto World and a caption saying "Tom Gross, Former Deputy Assistant Secretary, DOE" appears underneath his picture. The picture shifts to scenes showing people standing near cars listening to an instructor. Then the scene shifts to a person fueling a car.

TOM GROSS: "The Clean Cities ability to bring together a lot of committed, passionate people? people who were passionate about making changes in transportation energy is key, and Clean Cities early on became a focal point for making that happen."

(John Davis Voiceover)
But the Clean Cities mission is far from over, and DOE's National Clean Cities Director Dennis Smith sees even more potential ahead.

The Clean Cities logo appears on the screen. A video of Dennis Smith appears. As Dennis talks, a logo of Auto World and a caption saying "Dennis Smith, National Clean Cities Director, U.S. Department of Energy" appears underneath his picture.

DENNIS SMITH: "The reason that Clean Cities has been successful for so many years, and why I think it will continue to grow into the future, is that people really understand how important it is for us to no longer be addicted to oil and to dirty petroleum-based fuels for our cars and trucks. Working through their Clean Cities coalitions they are beginning to realize that they can ban together in their communities and that they can choose to use these cleaner alternative fuels and even more efficient vehicles. And you know what? They are making a difference." 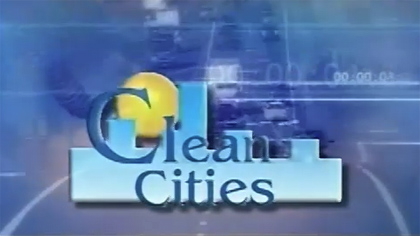