This is a text version of the video segment Los Angeles Saves With Hybrid and Plug-In Electric Vehicles, which aired on March 31, 2012.

JOHN DAVIS: Our success story this week takes us to the City of Los Angeles, which boasts over 4,400 alternative fuel vehicles—everything from gas-electric hybrids to dual-fuel refuse trucks to electric cars like the MINI E.

The city field-tested five MINI E plug-in electrics. City workers said that they were getting about 100 miles on a full charge. Recharging takes about three hours using a dedicated charging station. For emergencies, a convenience charger plugs into a normal outlet.

The city reduced petroleum fuel consumption by eight million gallons last year as the alt fuel fleet continues to grow by over 20% annually. That includes almost 500 refuse trucks that use natural gas as do two-thirds of their street sweepers with plans for a 100% alt fuel fleet. 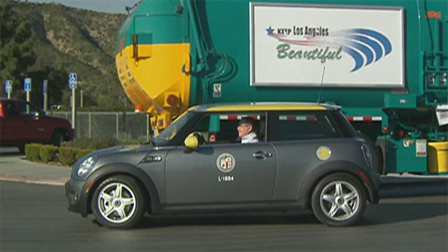