This is a text version of the video segment Glacier-Waterton Park Powers Buses With Propane, which aired on Dec. 31, 2004.

JOHN DAVIS: You know our Craig Singhaus loves vintage cars and trucks, but like everyone else here at MotorWeek, he recognizes the need for newer, more environmentally friendly machinery. So you can imagine his delight when he found a group of classics that are not only some of the cleanest vehicles out there but are helping us all enjoy a national treasure out on the high road.

NARRATOR: One of North America's most scenic wonders is Glacier-Waterton International Peace Park—the only national park in two countries: the United States and Canada. First established in 1910, one of the park's greatest challenges has always been to share the beauty of the park's Montana environment with the public while preserving its natural habitat. One solution has been to limit traffic on the park's roads by offering the public the opportunity to ride in officially sanctioned buses along the park's most scenic routes.

Since 1914, these buses have been an integral part of the Glacier Park experience. One of the many persons with strong personal ties to the buses is tour guide and driver Vic Daniels. Vic started driving the grid tour buses as a college student in 1967. Now a college professor, he still spends his summers driving visitors through the park.

VIC DANIELS: Originally, we had really a couple of generations even prior to these coming in 1936 as early as about 1914 or 1915 here in the park. Now, they look very antique-looking buses. These started coming in 1936 when the White Motor Company built these—for touring in national parks—they built some for this park, and they have been here ever since 1936.

NARRATOR: Which means generation after generation has marveled at nature's beauty from the relative comfort of the red buses.

VIC DANIELS: On this trip, for instance, out at Lake McDonald Lodge, we start here in a very lush area—western red cedar, hemlock. As we proceed up the road, we start climbing into other life zones where we see different vegetation. We eventually get up right to the tree line at Logan Pass. We could see mountain sheep—mountain goats—could be a grizzle in some cases up above the road. Marmots—so it's almost an alpine tundra area when we get to Logan Pass. Waterfalls—just a lot of geological features. Everything was carved by the Ice Age glaciers.

NARRATOR: Which also means a very tricky road to traverse.

VIC DANIELS: Going-to-the-Sun Road was completed in 1932. It took 10 or 12 years to complete—very difficult, especially on this higher part of the western side—the alpine section—used a lot of dynamite. They did use Swiss engineers for consultation on some of the difficult parts. So now it is still a challenging road to drive. These buses are 25 feet long—fairly wide. It's a very narrow road—generally 16 feet. In some places, rocks stick out on the inside and into the road a little bit. In certain sections, you do have to slow down or maybe stop almost to let vehicle through just to play it safe.

CRAIG SINGHAUS: Now for me personally, this is a real kick. You see, my grandfather was a mechanic for the White Motor Bus Company back in the 1930s. He worked on buses just like this.

NARRATOR: Well, at least they looked like this. Actually, these vehicles were completely refurbished in 2000 and 2001 by Ford Motor Company. The bodies were disassembled and restored by Ford craftsmen and then reassembled on a modified Ford E350 van chassis. The power train includes a 5.4-liter flex-fuel V8 set to run on gasoline or propane in a modern automatic transmission. The result is sort of the ultimate rest-o-rod—looks like an oldie but runs like new. And because it runs on propane, there is minimal environmental impact.

This cooperative effort between Ford Motor Company and the National Park Service means that future generations from around the world will continue to enjoy the beauty of Glacier-Waterton International Peace Park. And an important piece of environmentally compatible automotive history is preserved as well. 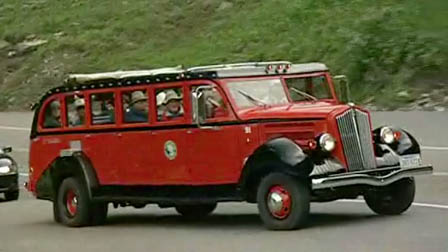