Metropool is Rideshare Operations' EV rideshare program, and it's one of the nation's first. The Rideshare Operations team, led by Supervisor Syd Pawlowski, was involved in concept development, policy review, and placement of charging stations. The team garnered support from Western Washington Clean Cities and major employers in the region to help spread the word. Together, they reached out to commuters, introducing Metropool as a cost-effective transportation choice.

The coalition was engaged in the project from its inception, working with stakeholders ChargeNW, Ecotality, and Puget Sound Regional Council to study EV deployment and associated infrastructure. "As a result of our thorough analysis, we allocated infrastructure intelligently and in a way that supported Metropool," said Coalition Coordinator Stephanie Meyn. The coalition also assisted Metro Rideshare Operations with calculating EV life cycle emissions.

An assessment of the EV program conducted in 2013 showed very positive results, including the following: 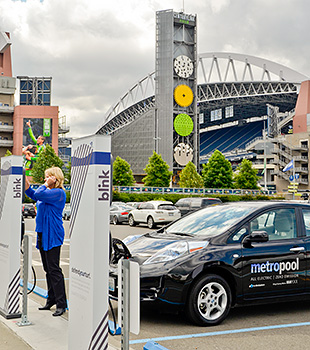