It's easy to get the vehicles. The tough part is the infrastructure. After that, the key is to keep an eye on the price and make sure it continues to be economically practical.

Successfully transitioning a fleet to alternative fuels requires investment in fueling infrastructure and a strong commitment to modifying driver behavior. Motivated by energy security, economics, and emissions reduction goals, the City of Chicago fleet began its journey by acquiring E85 flexible fuel vehicles (FFVs) in 1995. Today, it has more than 1,860 light-duty FFVs in law enforcement and municipal applications. The fleet displaces about 1.2 million gallons of gasoline per year through the use of E85, making the City of Chicago the largest user of E85 in the Chicago metropolitan area.

Fleet drivers expressed a genuine interest in E85 after the initial FFV roll-out. But with only six E85 fueling stations available to support more than 1,000 FFVs, the city quickly realized the need for E85 infrastructure expansion. Initially, the city lacked the funds to support such a project, but officials worked with the Chicago Area Clean Cities (CACC) to develop project goals, cost estimates, and timelines. Being prepared with these plans allowed the city to take advantage of a funding opportunity when it arose.

In 2009, CACC submitted a proposal for American Recovery and Reinvestment Act (ARRA) funding, including the city in the larger Chicago Area Alternative Fuels Deployment Program. The E85 infrastructure project secured approximately $700,000, half funded by ARRA through DOE and the remainder matched by the city. By expanding the city's private E85 fueling infrastructure to a total of 11 stations, the Chicago Department of Fleet and Facility Management and the Chicago Department of Environment determined the city could achieve an 11-fold increase in E85 use by 2011.

With funding secured and planning complete, the city broke ground at five new E85 fueling sites in January 2010 and completed all work by March 2012. During this time, the city expanded the number of FFVs in its fleet to more than 1,500 vehicles.

To maximize petroleum displacement, the city developed a "lockout" policy for its FFVs: Using the existing fuel management system, the fleet requires all city FFVs to fuel with E85 when at city fueling stations. Drivers enter vehicle identification numbers at the city's fueling kiosks, and the fuel management system directs FFV drivers to proceed to E85 dispensers.

E85 consumption skyrocketed after the lockout policy was implemented, hitting approximately 600,000 gasoline gallon equivalents (GGEs) in the second quarter of 2012. The city was pleased with the policy's effectiveness, but challenges began to arise when E85 became significantly more expensive than gasoline on a GGE basis. "It's easy to get the vehicles. The tough part is the infrastructure. After that, the key is to keep an eye on the price and make sure it continues to be economically practical," said Samantha Bingham, CACC coordinator and environmental policy analyst at the Chicago Department of Transportation. The city had to find the right balance between environmental and financial sustainability. So it enacted a strategic plan to remove the blanket lockout policy and instead base its E85 fueling requirements on daily price differentials between gasoline and E85.

Under the new plan, the Chicago Department of Fleet and Facility Management re-institutes the lockout policy when E85 prices are equal to or less than gasoline prices. It places the fueling decision in the hands of individual drivers during the "policy-free" periods. Even with the policy modification, the fleet's E85 use is consistently higher than it was before the E85 infrastructure expansion. The city is also committed to working with fuel suppliers to find ways to keep the price of E85 below that of gasoline, and it is considering options to decouple the alternative fuel and conventional fuel contracts.

E85 is not the only alternative fuel the city is committed to implementing. Beginning in 2000, the fleet procured its first six compressed natural gas (CNG) vehicles and has added to its CNG fleet significantly since then. A portion of the city's ARRA funding was allocated to the expansion of CNG infrastructure. The city also has hybrid and all-electric vehicles in its fleet. It is planning to introduce an all-electric refuse truck later in 2014, a much-anticipated procurement because of the truck's quiet operation.

With CACC's assistance, the city has been able to achieve several key goals outlined in its Sustainable Chicago 2015 Action Agenda. These include expanding infrastructure in Chicago and reducing 2012 baseline fossil fuel consumption levels by 10% through the use of alternative fuels and advanced technologies. The coalition also assists the city in quantifying its emissions reductions.

Looking ahead, the city plans to continue to increase the number of alternative fuel and advanced vehicles in the fleet by 10% per year, and CACC will ensure that the city stays aware of funding and networking opportunities. 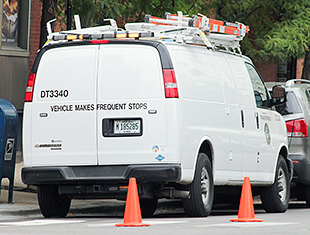